One of the most impressive art forms that you can see in Thailand, si the dancing. The country could be split in five huge regions, where you can find different kinds of dancing.
Most of the touristic offers in Thailand include some “traditional dancing”, but it’d be more appropriate to call it “Tourist-tailored Thai dancing” as the tourist will have just a few samples of the most popular dancing styles. Moreover, as far as I’ve seen, it’s quite rare that the tourist will receive some information on what is happening on the stage. To make the matter worse, many times the “Thai dancing” is hold inside restaurants, when people are just eating and not paying much attention at the show.
So, I decided to write a short guide about the Thai dancing, just to let the reader know something about what will be performed in the shows. Of course, the Thai dancing can’t be summarized in just 3-4 dancing styles, but on the other hand, it’s much unlikely that a tourist will see a performance of some particular or local style. So, I decided just to enlist the few ones that I’ve seen in these “Tourist-tailored Thai dancing”.
Seeing that I’m about to write about the dancing styles, and I’m going to write about the regional origins of the same dances, I’m going to show the following map where you can see the different Thai regions. 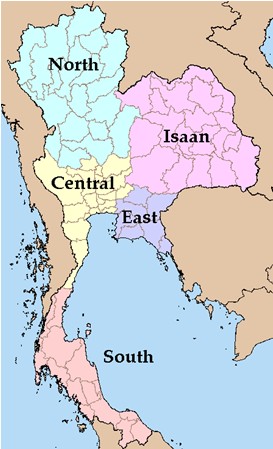 In Thai language, the Thai dancing is called “Ram Thai” (in Thai รำไทย) and it could be divided in two main categories:

The Beginning of the Art of Dancing

The Thai dancing goes deep in the past. As every other country, also Thailand had its way of dancing. Anyway, the Thai dancing of our day has, more or less, even an year of birth. It’s the 1431, when the Thai (Ayutthaya "พระนครศรีอยุธยา", to be correct) won over the Khmer empire and conquered the city of Angkor. On that time, the Thai King decided, in spite of obliterate the Khmer culture, to hire a Royal ballet group and take it to Thailand. That’s how started the Thai Classical Dance (also called Khon or Lakon Nai). 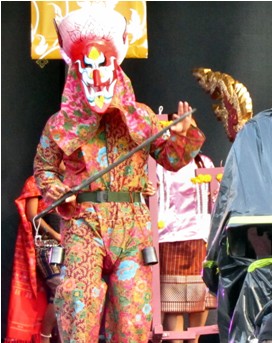 The Thai Classical Dance at the beginning was meant as shows that were linking the Nature, the Earth and the Eavens. Later, also after the Western influences, the dance went under heavy changes, until now that, thanks to the Royal Patronage of Her Majesty the Queen, the Thai Classical Dance was restored to its ancient beauty and preserved from further changes. Many of the shows involve scenes from the Ramakien, the Thai version of the Ramayana, with the dancers dressed as Gods, Angels or Mythical creatures.

At the beginning, the Classical Thai Dancing was bound to be shown only at the royal courts. So, seeing that the normal people couldn’t take part at the show, was born a more interesting from of dancing, the Likay, or folk dancing. The Linay has many differences in base of the land where it was developed and now it’s still the core of many of the “Thai Dancing Shows” held for the tourists around Thailand, even though that often is staged also some small part of Khon (in Thai โขน) dance as well. 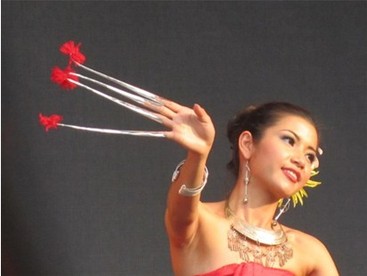 The “Fingernail Dance” or “Fawn-Lep” (in Thai ฟ้อนเล็บ) originate from Chiang Mai (Northern Thailand). The dancers, usually women, use to wear four brass conical “fingernail extensions” per each hand, to enhance the gracious movements of their hands. 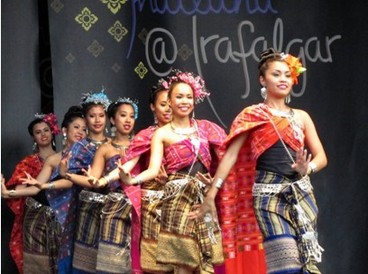 This dance is also an old form of Fawn and it uses the typical Thai scarves to perform beautiful choreographs. 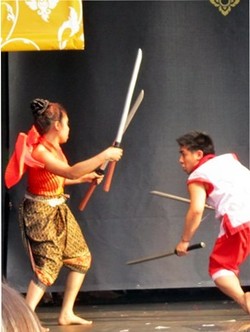 The swords and sticks dance comes from the ancient times, and it’s inspired from the typical Thai fighting styles.

Lao Kra Top Mai dance is originated from the Northeastern and Central Thailand. This dance involves the musician, keeping two parallel bamboo stick at the two ends and making them hit harmonically each-other in all the length and on the ground create rhythmical music. The dancers will dance putting feet between the sticks and getting them off before the bamboos will close. 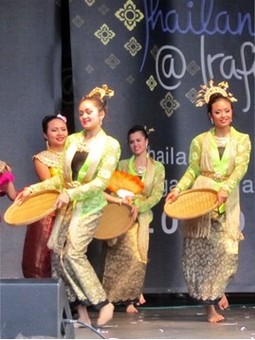 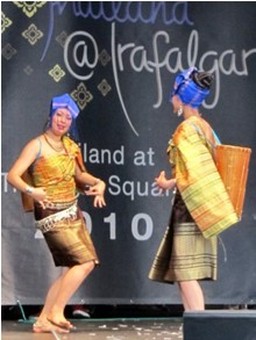 This dance is performed during traditional festivals. The dance can use all the tools that are usually used in the common life, and depict typical situations, like, for example, cooking the rice or working in the fields. The name of the dance is “Serng” which anme is followed by the name of the tool used in the dance (for example, the Kratip is the rice basket). The instruments used are a long drum, charb (cymbals), grab (a kind of castanet), mong (gong) and the kahen (like an old-fashioned syringe). 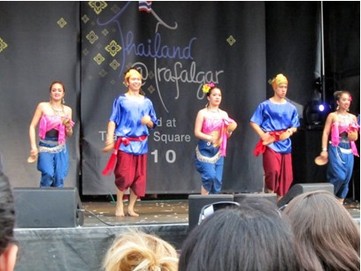 This form of Serng uses two coconut shells (Krapo means coconut in the Isaan region dialect) per each dancer. The dancers execute beautiful choreographies moving, shaking or lightly tapping together the coconut shells.

In most of the South East Asia there is a great passion after the cockfighting. Being such a significant part of the rural life, if became part of the folk dances too. The dancing involves a crowd of dancers where two are dressed as roosters while the rest are the crowd cheering and betting on a rooster of the other. Usually the dance is comical and it’s made to make smile the people watching it. It’s much less rude than a real cockfight and more entertaining. 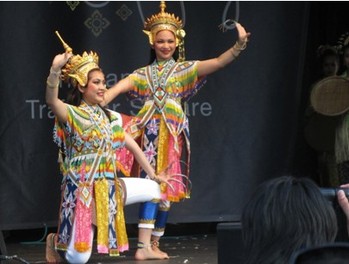 Monohra is a southern style and one of the oldest Thai dance drama. It is a classic fairytale about Nang Manohra a kinareeor (Bird-Woman Princess) that lives in the Himapan forest. Every full moon she goes to the big pond with her sisters to play. Sometimes it also shows an hunter (called Pran Boon) trying to catch her. 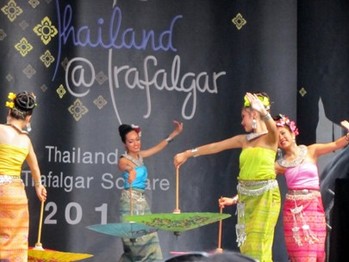 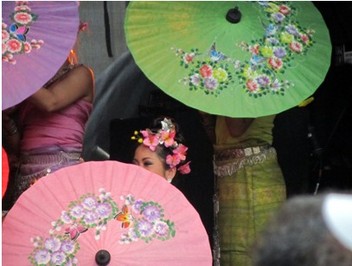 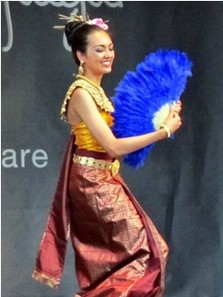 The Umbrellas and Fans dances both originate from the episode of “The churning of the ocean of milk” from the "Bhagavata Purana" (also called "The Book of the Gods") one of the mail Hindu books. In the episode, after the churning of milk there was a battle in which the demon Pra Rahu swallowed the sun and the moon, but a moment later it was beheaded and the sun and the moon came back out. The legend says that the demon keeps on swallowing the sun and the moon and he’s the cause of the eclipses. The Tari Kipus Payong dance originates from the south of Thailand and uses Fans and Umbrellas to eclipse the dancers from the stage. Both the music and the dances are influenced by the neighboring Malaysia.

Ram Muay (รำมวย) is the ritualized dance that takes place before Thai Boxing matches such as Muay Thai.
Powered by