Hello my friend!!!
With this part of my Travel Diary today I'm going to show you some more really important historical places. In fact, on that days we only moved from an archaeological site to the next, as the South of Turkey was colonized by many populations and it's full of really interesting places worth to be seen. In the previous parts of my Travel Diary I shown you many places that amazed me both with their beauty and with the feelings that I felt while being there. Today I'm showing also the place that, on this travel, gave me the stronger feelings. I hope that you'll like the places that I'm going to show to you.

Ephesus - The House of the Mother Goddesses 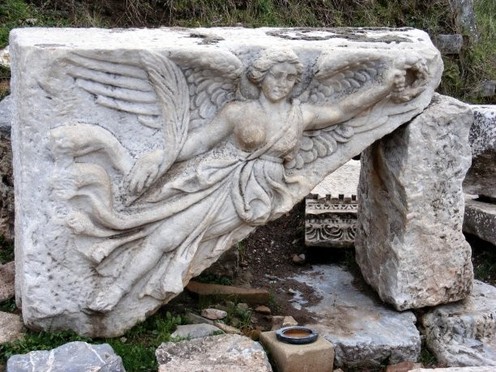 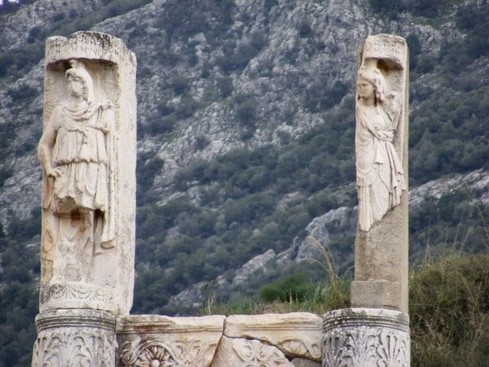 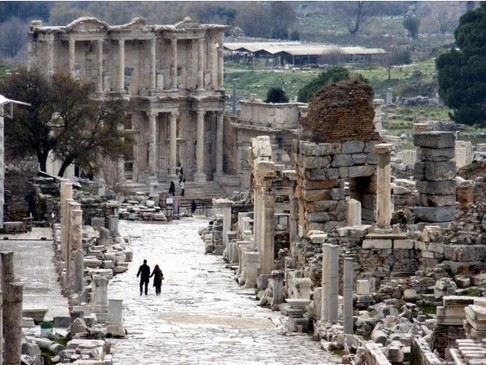 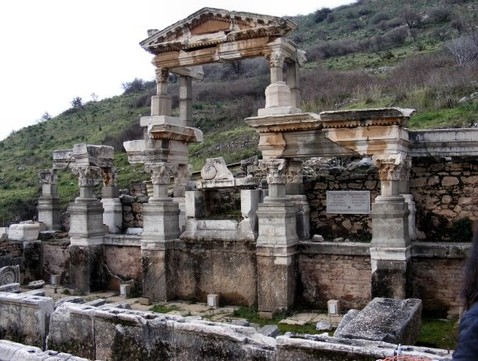 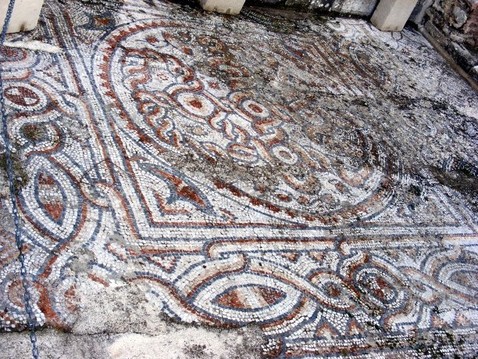 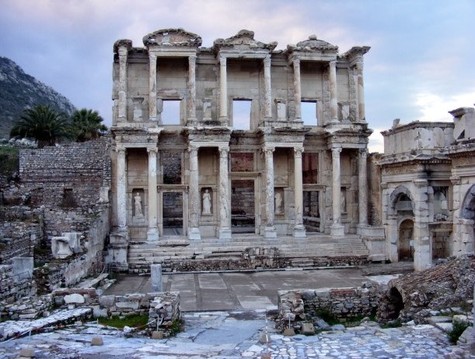 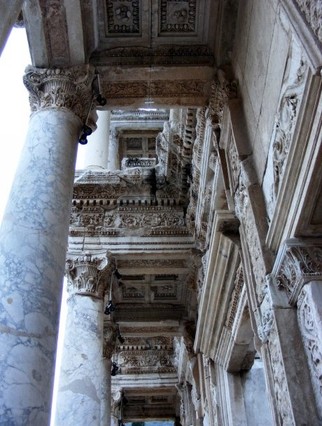 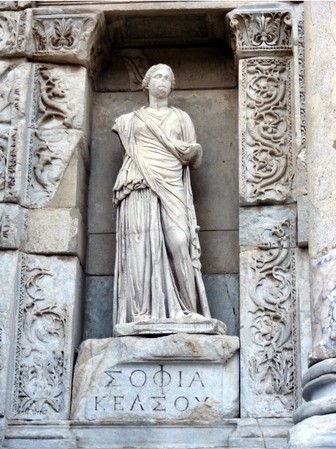 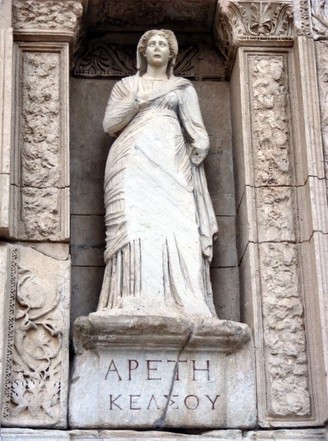 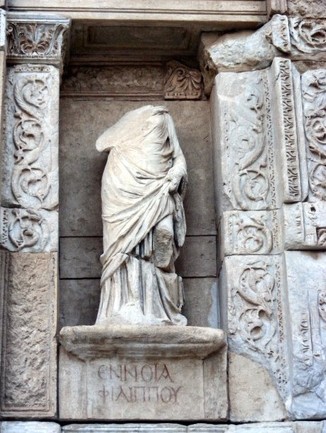 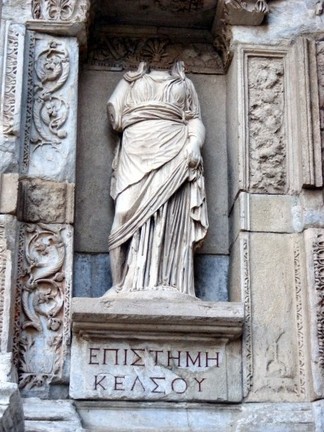 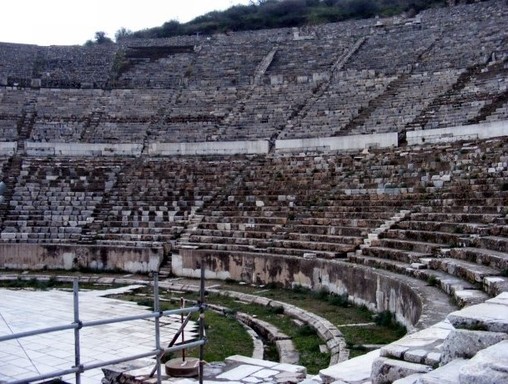 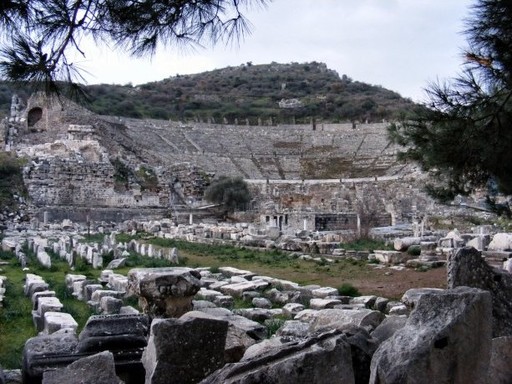 Pergamon - The house of the scrolls 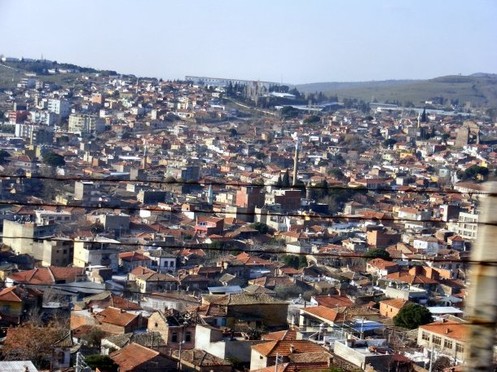 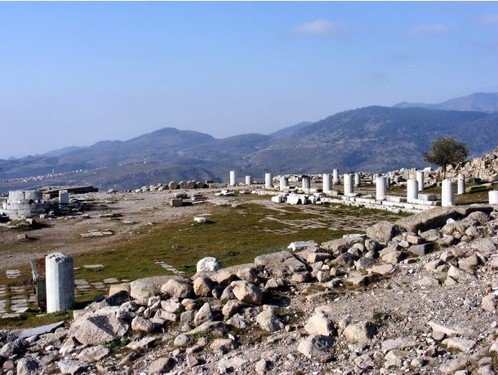 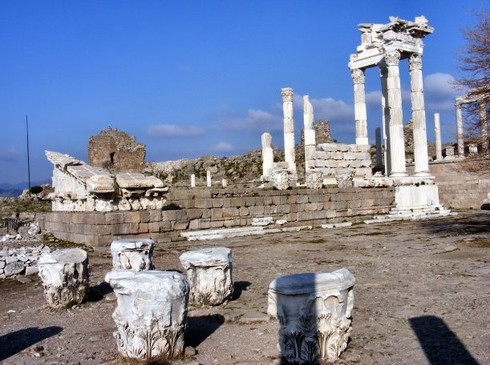 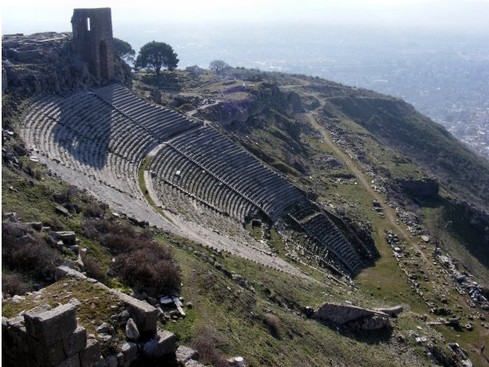 In the Greek-Roman times Pergamon was a really rich city. The legend says that was in this place that, when Egypt stopped to export their Papyrus scrolls, that were made new scrolls out of the leather. Soon the use of these scrolls became so popular that were used into all the Roman Empire. The day that we got to this place was really cold and windy. Being on the top of an hill didn't help much and we really froze up there. The city itself, even if in the encient past was really important, in our days there's not much left. In fact, the nearby cities used this place as an open-air marble cave. In more, while in the last century Germans performed research digs here, they savaged much of the important things that they found. Now the most important things can only be seen in the Berlin Pergamon Museum. The most important thing, in the Berlin Pergamon Museum, is the "Great Altar of Pergamon". Now Turks are asking these things back. I can't say that they are right. In fact, first of all, the old Ottoman Empire agreed to let Germans to bring all these relics away (so Germans didn't steal these things), and then, for what I've seen, in Turkey can't manage to keep the places well preserved, as well as the best places that I've see were kept by German (Efesus) and Italian (Hierapolis) research teams, while the ones in the hands of Turks were all ruined (Goreme). In our days, in Pergamon there's not much left to be seen. In the past, here were many temples and beautiful things, but now there are only "well displayed" ruins (see pictures 2 and 3). Here there was also the Pergamon Library that is believed that it contained 200.000 scrolls. After the fire into the Library of Alexandria, this became the most important library of the ancient world, but the Romans (Mark Anthony) had the bad idea to give the scrolls as a wedding gift to Cleopatra, the Queen of Egypt. So, with the times, they went lost. The best thing is surely the theater that you can see in the fourth picture. This theater, build on a side of the hill, is just as beautiful as it's huge. When you're there, you feel the dizziness as you could fall down of it. I believe that it would be very beautiful to watch the performances there in the Roman times. In Pergamon there was also another very important thing. At half way from the lower city called "Bergamon" (you can see it in the first picture of this group), there's the Asclepeion, the Sanctuary of Asclepius, that here worked also as an hospital. The interesting thing is that here the hospital, beside the ancient medicine was also working as a Psychology center and even a Spa. It looks like they already knew the stress and tried to manage it in the same ways that we're doing it in our days. The lost city of Pergamon is still very beautiful and the location is absolutely wonderful as you can have a very beautiful panorama before you.

Troy - Stepping into the legend 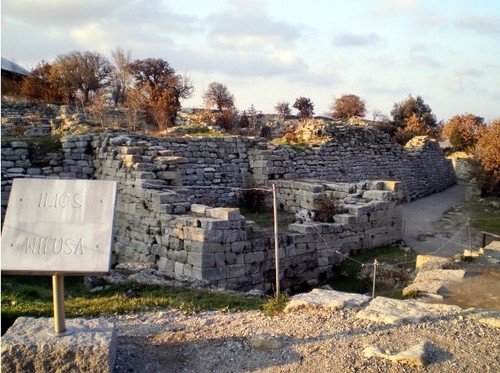 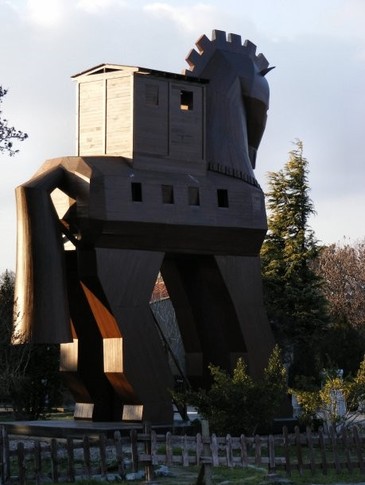 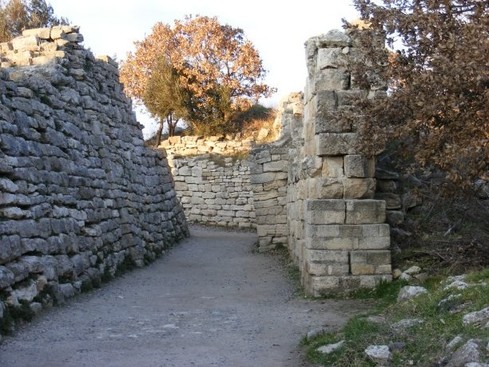 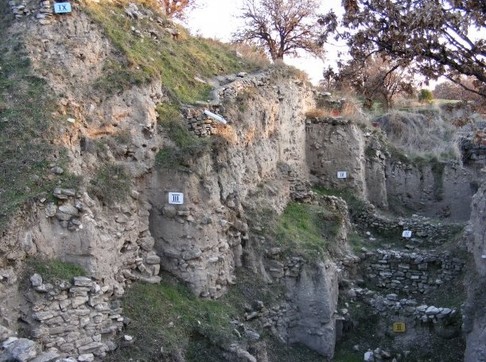 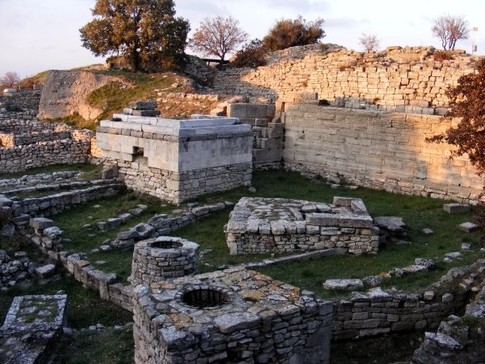 Stepping into the legend: The last archaeological site that I visited in Turkey was also the one that meant the most for me. In fact, near to the coastal city of Canakkale, there's lying the legend itself. The city of Troy is waiting for you there. For thousand years was thought that the city of Troy, described in the Homerian books, could be unexisting as nobody ever found a trace of it. This city was built and destroyed nine times. The first "Troy" was built about in the 3000 b.c., while the ninth "Troy" was built by the Romans in the first century b.c., but the it was soon abandoned as was funded Costantinopolis (Istanbul). As many other cities, this one had several names too. For example, the Hittites called this city Wilusa o Truwisa, the Greeks called this city Troia or Ilion, the Romans called it Troia and then the Turks are calling it "Truya". The city, after that it was built for the ninth time and went in ruins, was completely abandoned and disappeared. The city was completely lost until Einrich Schliemann found it again in the 4th August 1872. After the discovery were performed many digs, and much was discovered there. The problem is that the city was destroyed and rebuilt many times, and now you can find things from the different "Troys" mixed all the way. Anyway, as you enter the dead city, you find yourself before something scary. You find a brand new "Troyan horse" (you can see it in the second picture of this group). Its the worst and most historical-unlikely thing that I've ever seen. In fact, beside the cute idea to show it before the entrance of the city, the horse looks more like a pullman than a horse... By the way, the "genius" that built it, decided even to make windows in it... Of course, I wonder how would be the Homerian story if the Trojans could see the Greeks sitting and waving their hands from the windows of the horse...  By the way, researches said that probably the "Troyan Horse" existed for real, but not in the way that Homer described. Probably it was build after the conquest of Troy from the Greeks. Anyway, first off, the worst was gone. In fact, as you step inside the city, you find yourself walking into the legend itself. You're in Troy and you can't believe it. The city that I studied so much at school, and that, due to the fact that is into a novel, sounds like a fairy-tale place, but it is real, and it was all around me. That was a really great feeling. The "Homerian Troy" was the seventh and its walls are the first ones that you find before you. You can see them in all their beauty in the first and third pictures. All around the city, you can only see walls as through the centuries didn't remain much more of the city. In the fourth picture you can see a dig where are shown the pieces of different "Troys", as you can see, they are all mixed up. In the fifth picture you can see where in the past were some temples and also were performed human sacrifices. After watching this, started the sunset. The orange light of the sun tanned the walls, and the silence started to fall deep on the ancient ruins. The peace embraced the entire site, and in this touching atmosphere we could feel the most the magic of this ancient city. The legend was there, and in spite the small size of the place, the emotion were really strong, as every rock, in the sunset, looked like bleeding for the massacres that happened there, and she, the city herself, was willing to tell us all her story. And I was eager to listen to her.

Canakkale - The coming back to Europe 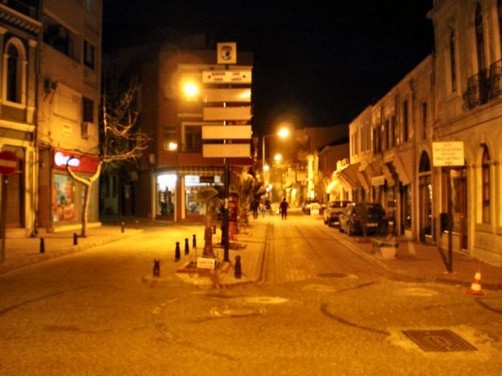 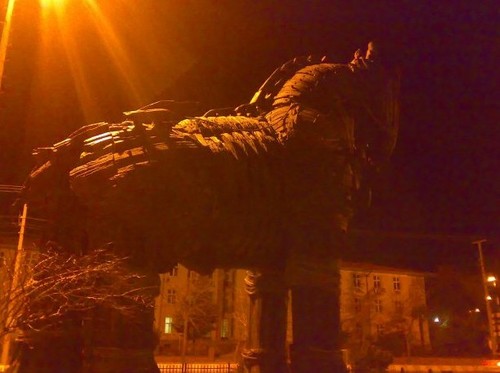 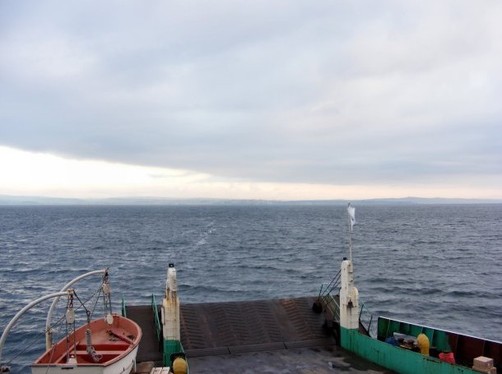 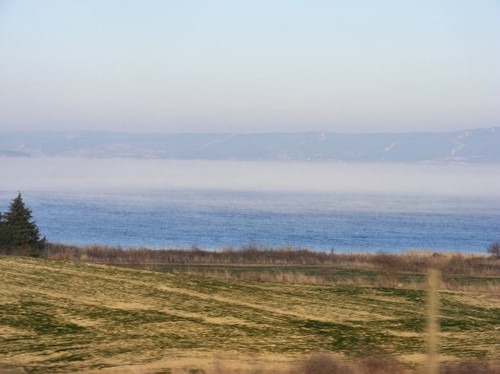 That evening we left Troy that was already dark. We travelled for a really short time and we reached the city of Canakkale. Our hotel was about 10 km out of the city and it was really beautiful. Our guide told us that the city was quite pretty and there we could also see another "Troyan Horse" as it was the one that was build for the movie "Troy" with Brad Pitt. The guide said that she'd let us to see it the next day, but we weren't trusting her anymore. So, with my friends Giovanna e Laura, took a taxi and went to the city. Canakkale is a really small city on the sea. It's absolutely pretty and with many small clubs for young people. You can see a street of Canakkale in the first picture of this group. It was really lovely to walk there and we couldn't chose which one club to visit first. After it, we went to look for the "Troyan Horse". It was a big fun to look for it, as first Laura thought that she seen it, but it was a boat, and then I found it, but as nobody of us was wearing their glasses (we all forgot ours in hotel) they didn't trust me until we were under it. But it was really funny. This horse is very beautiful, and it's built in a way that it could look like made by the ancient Greeks to conquer Troy for real. We all liked it so much. After seeing it, there was still time for a beer and then we came back to our hotel. The next day we left early and we came back to the European side of Turkey. We were told that near to Istanbul we could find the snow, so we had to find a faster way to gain time. The guide didn't bring people to see the Troyan Horse of Canakkale, and the only way they had left, was to see it in our pictures. As it often happened, we were right to not trust the guide. More we went north, most the weather became colder. In the pictures 3 and 4 of this group, you can see when we crossed the Dardanelles and the Aegean Sea from the European side of Turkey. The staying in the Asian side of Turkey was really great and I loved to see so many different places. Here you can see traces of history herself and everywhere you can find something that you can connect to what was studied into the history books. It was a really beautiful experience.
Powered by