Ciao my friend!!!
Today with this part of my Travel Diary, I'm going to show you some Historical places. After having seen the center of the Anatoly, visiting the Cappadokia, we went to the south/east of Turkey. From the empty spaces and cold lands, we went toward more Mediterranean landscapes. Although the cold didn't leave us, it was still really GREAT to be in such important places for our history, that, on the end, the cold didn't matter much as it was nothing against the amazement we felt for those places. I hope that you'll like this part of my Diary.

Konya - The city of Mevlana 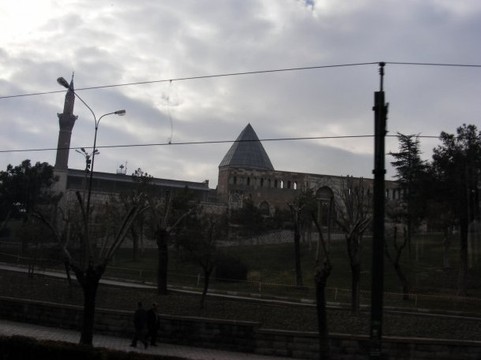 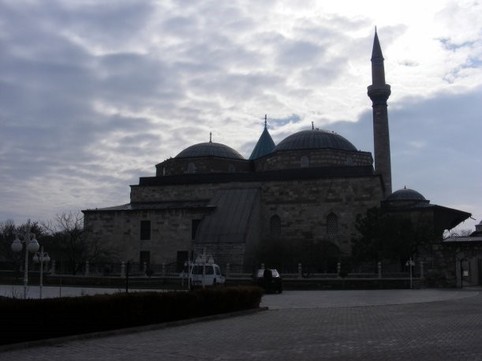 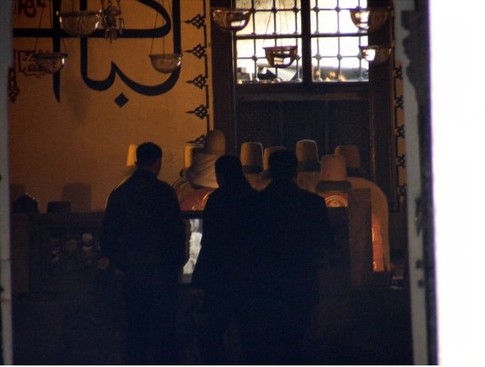 The day that we left Nevsehir, we headed south/west, through the central Anatoly, toward a city called Konya. After Konya, we should change our way to go even closer to the coast. This was the most long ride through Turkey, as it was about 700 km to do all in one day. Our first stop was in Konya. As soon as you enter this city, you feel that, if you didn't already know that this city has some of the most important places of the Turk culture, you'd just think that it's worthless. In fact, as soon as you approach to the city, you can only see factories over factories (you can see Konya in the first picture of this group, where I pictured a typical mosque of this city). In spite of this, Konya has something that could surprise the traveler. In this city, you can find the Mausoleum of Mevlana Celaleddin Rumi (often known only as Rumi). You can see two pictures of the Mausoleum in the second and third pictures of this group. Mevlana was born in 1207 in Balkh, Afghanistan, and died in the 1273 in Konya, Turkey. In his life he had been a great Philosopher, Mystic and Religious man belonging to Islam. He founded the Mevlevi Order. The Mevlevi Order was founded on the principles of love and respect toward everybody and every religion. He was also the founder of the Whirling Dervishes, which ceremonies are focused on whirling on themselves until reaching a trance status. In the Mevlana Mausoleum, you can also visit two museums, one about artifacts from the times of Mevlana, and the second about the Whirling Dervishes. Both were really interesting. The one that was the most interested of all, was my friend Giovanna, because while at University, she studied many writings of Mevlana, and she loved them all. After visiting the Mevlana Mausoleum, we kept our journey to south/west that took for us all the rest of the day.

Pamukkale - The ancient city of Hieraplis on the Petrified Waterfalls 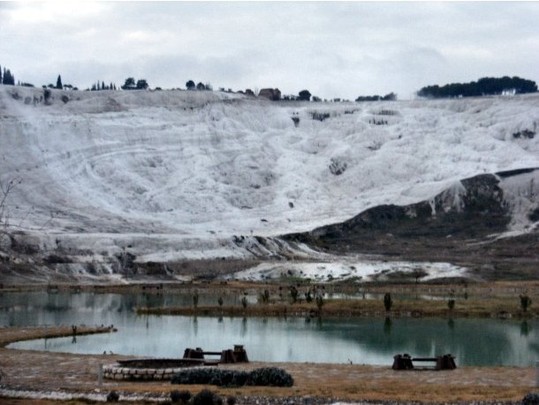 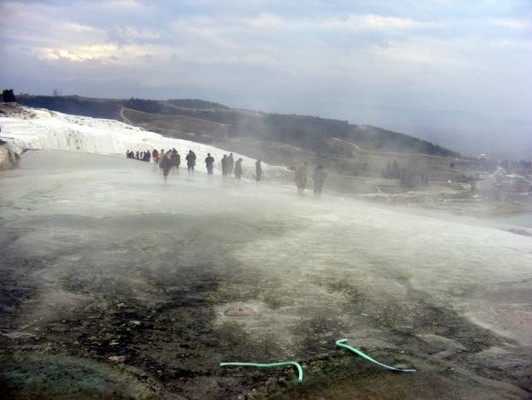 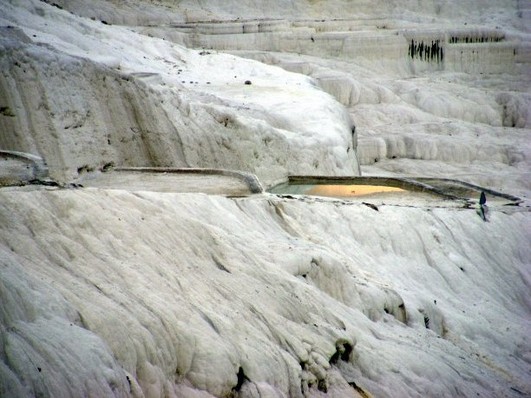 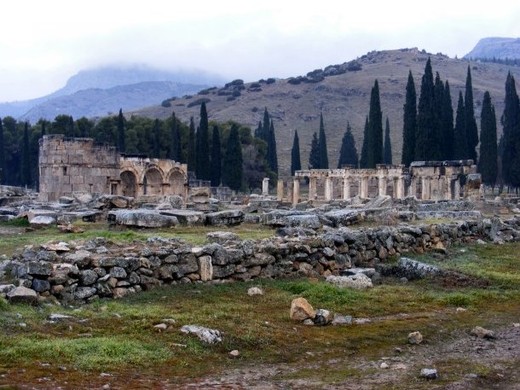 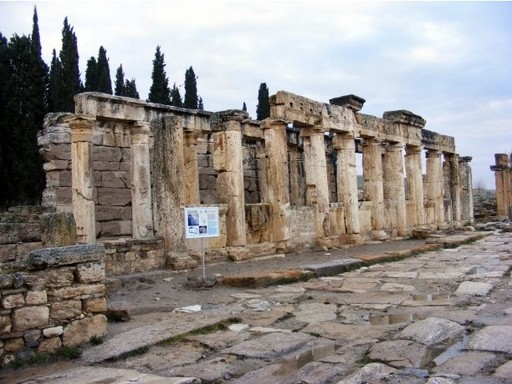 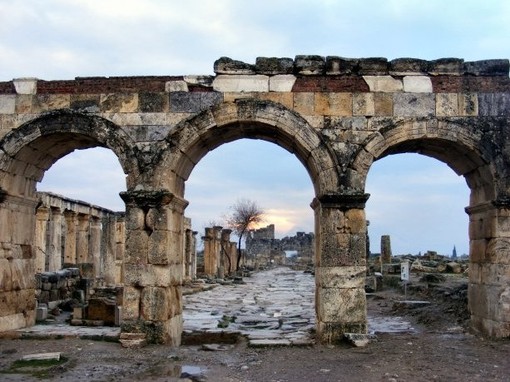 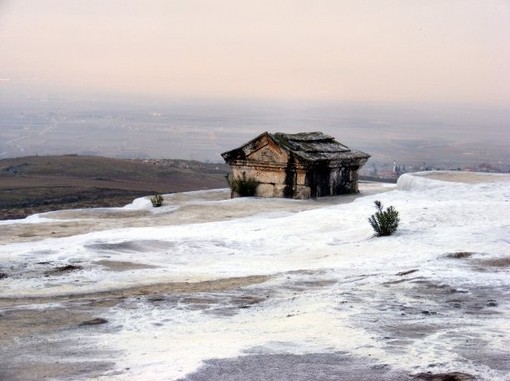 We reached the small city of Pamukkale in the late evening. Our hotel was one of the best looking of all the travel. It was made of a cluster of building surrounding the main one. The weather was terrible. Snow mixed with rain brought by the cold wind whipped our faces. It was pleasant to enter the main hall, but this was the only good spot of the hotel. In fact, our rooms were in a building separated from the main one. The rooms were cold and dirty. I don't know if you'll believe it, but seen that I had two beds in my room, I took all the covers and I placed them all on a single bed as it was too cold!!! The next morning the weather was much better. It just stopped raining and there was almost no more wind. So, it was good time to move again to go and see some very beautiful places. The first stop was to watch the Petrified Waterfalls of Pamukkale. Actually, these waterfalls are made by the Calcium brought to the surface by the hot springs on the top of them. Through the centuries, the hot springs made this beautiful landscape. These waterfalls even give the name to Pamukkale itself. In fact, the word "Pamukkale" means "Cotton Castle" and it's for the cotton-white Petrified Waterfalls. You can see the Petrified Waterfalls in the pictures 1, 2, 3, 7 of this group. On the top of these waterfalls, you can find the ancient Greek-Roman city of Hierapolis. This city is one of the best preserved Greek-Roman cities of the world. Here you can see both the ancient city with its perfectly preserved theater, and also the ancient necropolis. In the center of the Hierapolis there are the hot springs that made the Petrified Waterfalls. The archaeological site is very big and also really interesting. Unluckily, we had really short time to see it. So, we took a quick visit to the center of the city, through the "Columed Street" that you can see in the pictures 4, 5, 6 of this group. It was early morning of a cloudy day. And it was touching to see the sunrise from Hirapolis through the "Frontinus Gate" (you can see it in the 6th picture of this group), as some clouds opened showing the mountains behind of them lighted into the orange sunrise. That was really beautiful. This city deserves a long staying there, as you could visit many beautiful places and also, if the weather is good, to take a bath into the hot springs.

Aphrodisia - The city that became Stavropolis 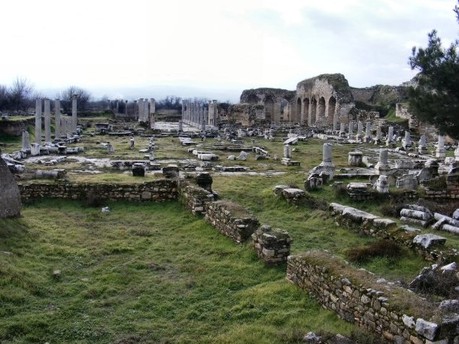 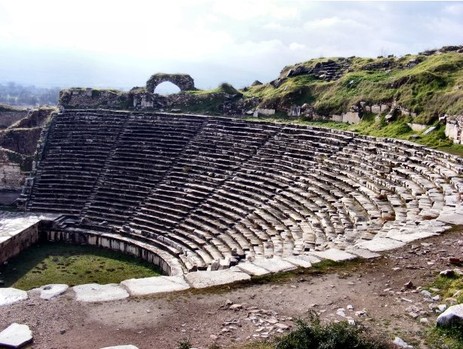 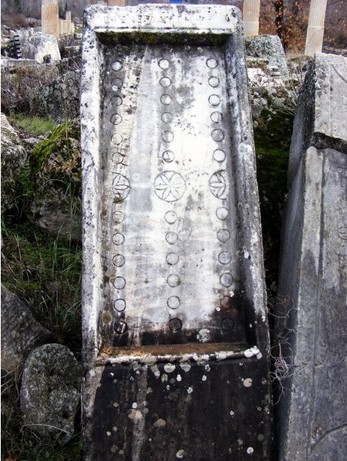 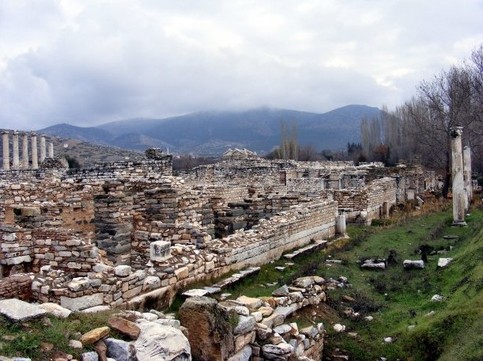 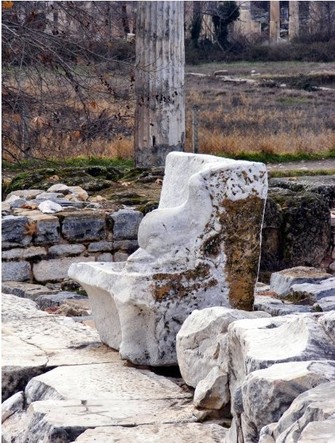 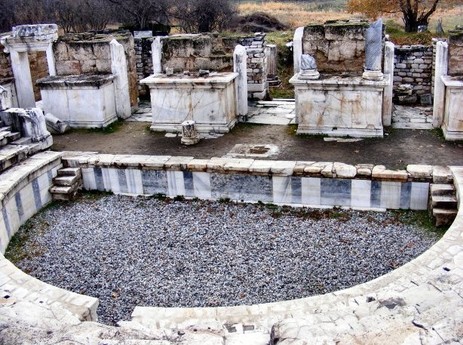 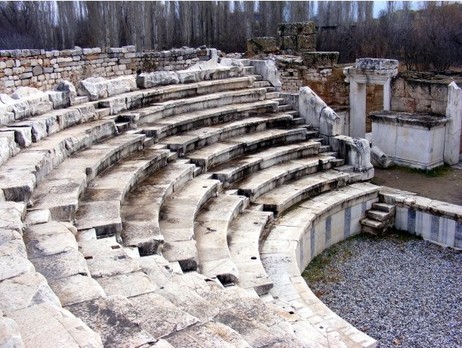 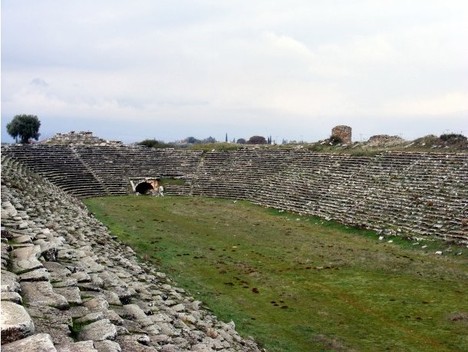 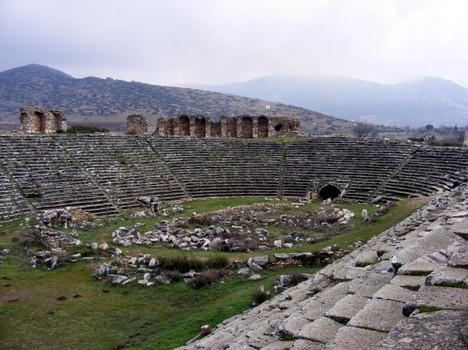 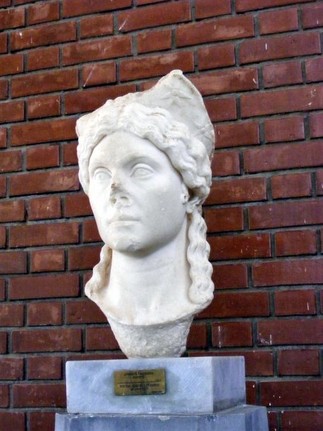 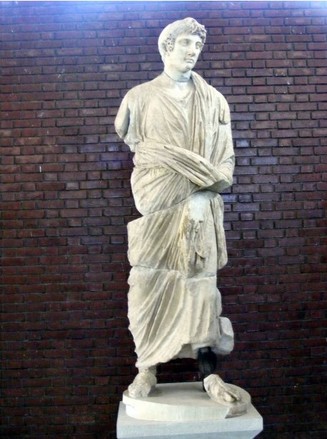 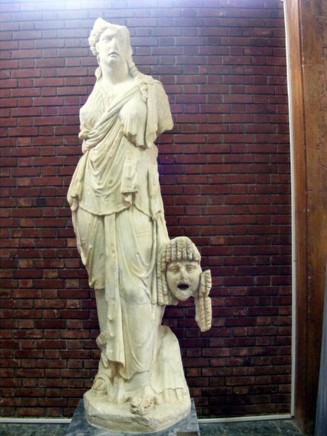 When you're in Turkey and you're in the south/west, you have the chance to go and see one of the best preserved Roman cities of the world. In fact, not very far from Hierapolis, you can see a smaller, and less visited city that is even better preserved than Hierapolis itself. This small city is called Aphrodisia. This city is much smaller than Hierapolis, and has not such a "scenic view" as the Hierapolis' Petrified Waterfalls, but in Afrodisia you can see a really perfectly preserved Roman city. As soon as you enter the city, you feel like being transported back on time. The theater, the streets, the baths are all wonderful. In this group of pictures, in the first picture you can see the first view you have of the city as soon as you enter it. Just behind a small hill on the left of the entrance, you'll find yourself into a very beautiful theater. A man of our group went on the stage to try the acoustic of the place and it was perfect. You can see the theater in the second picture. After the theater, through the Roman baths (a small spa in the center of the city), you can reach where the Aphrodites Temple was. When you are there you can only see columns and the ground where the temple was. It was really big and we suppose that it should have been very wonderful. The entire city was built in the name of Aphrodites, so the temple should be absolutely a masterpiece. Just near to the Aphrodites temple there is the commercial part of the city, where also the parliament was. In the third picture of this group I'm showing you something curious. In fact, this was a Roman board game. In fact, people played it, each player had tiles of different color and, playing in turns, they had to put three tiles of the same color in line. The first that did it was the winner. Just there near you can enter the commercial center of the city, while walking there, you can imagine how was being on that times (you can see it as it looks now, in the fourth picture of this group). Narrow streets among the shops, and then, all of a sudden, you'd find a wooden structure. You'd enter it, and you'd find the parliament. Now the wooden structure doesn't exist anymore, but the parliament is still perfectly preserved. You can see the parliament in the pictures 5, 6 and 7 of this group. I find interesting the Dolphin statue that you can see in the fifth picture. In fact, this was the city of Aphrodite, and the Dolphin was her symbol. Just near to the parliament, you can walk to the stadium. You can see the stadium in the picture 8 and 9. This is one of the biggest stadiums left from the Roman times, and still well preserved (actually is even better preserved than the "Circo Massimo" in Rome). As you can see it was really huge. In the picture 9, you can see the place where were held the gladiator fights. After leaving the stadium, you make your way to the exit of the city. While walking through those very enchanting ruins, you'll meet the Apollon Temple. This temple is absolutely a masterpiece, and there's one more interesting thing here. In fact, one of the archaeologists that loved more this place, and worked harder on it, was Kenan Tevfik Erim, that now is buried under this temple. When he died, his body was buried in the place that he loved the most. In the city of Aphrodites, under the Apollon Temple. Just near the Apollon Temple there is the exit from the city. Near to the exit of the city, there is the Aphrodisias Museum, where the statues and decorations found in the digs in the city are displayed. In this group of pictures I'm showing you some picture of some really wonderful statues. In the tenth picture you can see Aphrodites, she's so beautiful, and it's easy to believe that she'd made fall in love with her anybody that glanced to her. In the eleventh picture you can see Apollon in all his Greek beauty. In the twelfth picture you can see a Muse, I suppose that she's Melpomene, the Muse of the Tragedy. I find all these statues so beautiful. When you're in this museum you could spend hours watching to them. When we went away, we felt that this place will have a special place on our memories. Anyway, the story of Aphrodisias had one more interesting thing. In fact, after that the Roman Empire became a Christian Empire (when Costantinopolis became the capital of the Empire), the Romans decided to change the name of this city from Aphrodisias into Stavropolis, that means "The city of the Cross". The Aphrodites Temple was turned into a Cathedral, but this city lasted short and it was abandoned with the end of the Roman Empire. The thing that there aren't big cities there near, preserved it from being used as a marble cave from the people, and this let the city to come to our day so beautiful as it is.

Izmir - A modern city by the sea 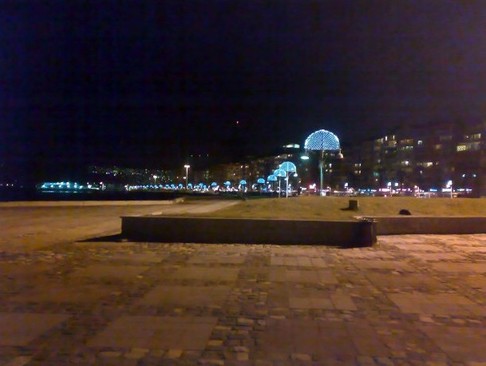 After many days traveling in the inland, we reached again the sea. This time we stopped in the beautiful city of Izmir. This city is really pleasant. It's quite modern, but not such a confusing as a bigger city could be. In the evening we decided to go to have a walk. So, when we were almost leaving the hotel many other people gathered to come with us. On the end, before leaving the hotel, some older people decided to go by themselves taking a taxi, while we went on foot. So, we had a long walk and we reached the seaside. It was really pleasant and beautiful to be there. You can see the seaside in the picture that I'm showing to you. Just there near we found a small and nice club where we had a cup of Cay (Turk tea) and some Raki (a anise alcohol mixed with water) too. We had really nice fun there and we spent a really pleasant evening together. That was really great.
Powered by