Ciao!!!
How are you? I hope all is very well!!! With this letter I'm beginning the diary of my travel to Cuba. I liked this travel very much. In the last years I've read so much about the "Isla Grande", and I thought that I knew very much about it. So I went and, in spite of all the things that I've read and heard, I discovered that what was surrounding me, just outside the walls of the resort, was much different than what I knew. I like to repeat that I liked this travel, but it was also a surprise to know how much people don't tell about Cuba, or more easily, just don't see of it. Talking to people after my coming back, I understood that many people that goes to Cuba just see their resorts and the facilities in them. But I like to live the place where I go, and in spite that I was also into a resort, I had a good chance to get moving and to explore the surrounding and meeting real people and the Cuban reality. I hope that you'll enjoy this travel diary as much as I enjoy typing it :-)!!! 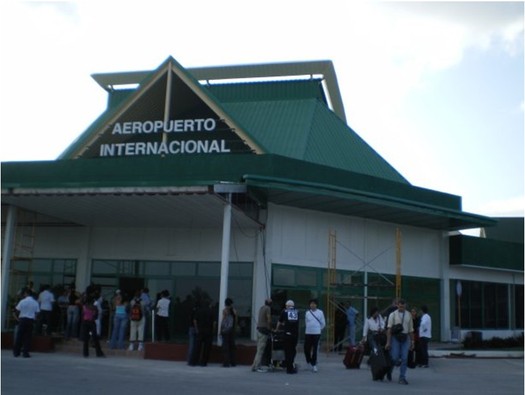 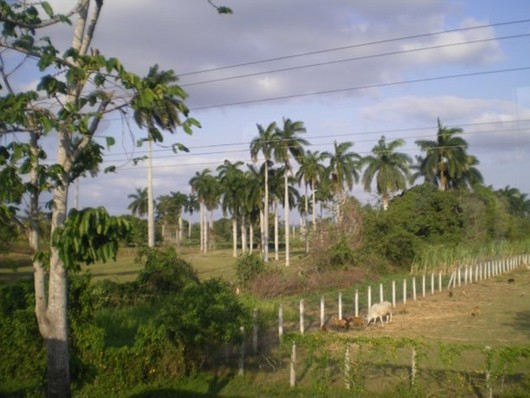 Playa Costa Verde - The Shores of Cristoforo Colombo: My travel to Cuba started with my arrival to the city of Holguin. When I planned the travel, I could pick the city of Habana or the city of Holguin. I knew much about both of the cities, and I chosen the second one. The reason was that, in spite that the city of Habana is the capital of Cuba, and probably it's very beautiful, I wanted to see some more quiet place that could still look like the "old Cuba". In more, the beaches near Holguin are much more beautiful than those near to Habana. I landed in Cuba on the 22nd of April and just after the landing I took a Pullman and I was brought to my resort, named Hotel Playa Costa Verde. The interesting thing is that just very close to the place where my resort is, there's also the same place where in 1492 the Admiral Cristoforo Colombo landed when he discovered Cuba (he discovered the "New World" just few weeks before). When Cristoforo Colombo landed on this place he said "This is the most beautiful place that mankind will ever see", and I have to say that Cuba is quite pretty!!! From the airport to the resort it took about 45 minutes through the Cuban countryside. The sides of the street were surrounded by tropical forest that every now and then was interrupted by farmers villages and palms fields. The tropical air smelled good and it was warm, just as I liked it!!! 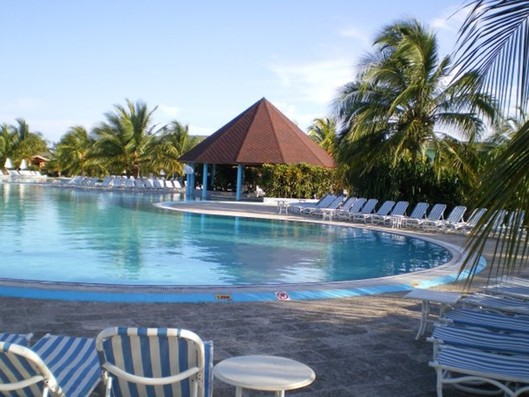 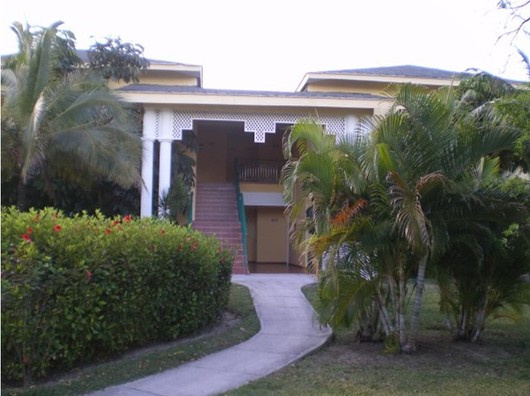 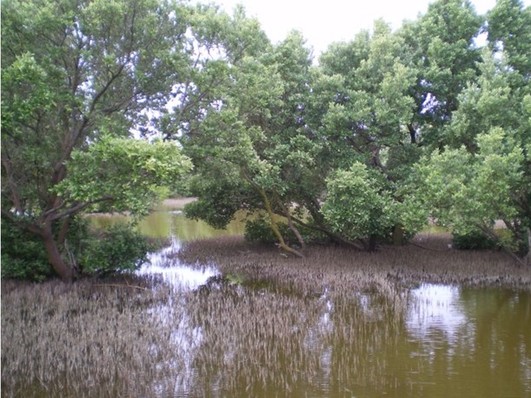 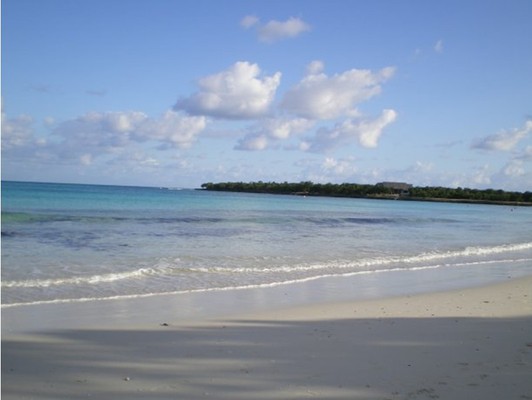 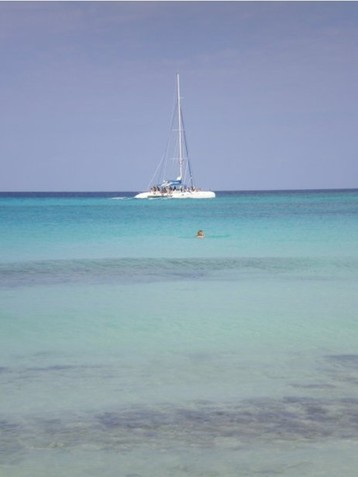 Hotel Playa Costa Verde and The White Beach: In this travel to Cuba, I had room into a very beautiful resort. In Cuba there are two kinds of touristic facilities. Those that are private, usually belonging to foreign companies, and those that are belonging to the State. This one is belonging to the "Gaviota" (that means "Sea Gull") company that is a company of the Cuban State. The place was very clean and looked quite new, even if it is almost ten years old!!! In the first picture of this group you can see the swimming pool. This was one of the "core facilities" of the resort. Here, in the day time, was packed of people, mainly Canadians. On the beginning I thought why should people stay into a swimming pool, when you just need ten minutes to reach the Caribbean Sea and bath in it. After a long while I understood why. In fact, looks like the way of traveling of these people is different than mine. In fact, we had an "All Inclusive" deal. That means that if you spend your holidays in those resorts, you have the chance to use of the facilities, the drinks and all the food that you can eat for free. Next to the swimming pool there are the main restaurants and bars... That means, that many people just didn't care to the sea, but just to eat and getting drunk... I didn't care much about getting drunk and over-eat so, I spent most of my time in sea with my friends and exploring the surroundings. When I left for this travel, I did it again alone. People say that I'm nuts doing it so, but I like it. So, when I've got to the village, I took the key of my room (you can see it in the second picture of this group) I discovered that I wasn't the only "lonely traveler" of this group. The girl next door, named Sabina, was also alone like me. So, for us it took just a minute to became good friends. That's weird to see how many things in common we had (almost the same job, same ideas, same hobbies). The next day I met many other Italian guys and we set up a group. The funny thing was that many of them decided to stick with me when I saved them from a guy that wanted to cheat them. In fact, the first day I've become friend with the life-guard of the beach (if you need anything in Cuba, just get friend to a life-guard of the beach, or to a waiter) and, speaking a mix of Italian, Spanish and the slang of my city he advice me that the guy was a criminal and, sharing this information with my Italian friends, they started to follow me. In the other pictures of this group you'll see first the swam (part of a National Park) that we had to cross to reach the beach, and then some pictures of the beach of my resort. 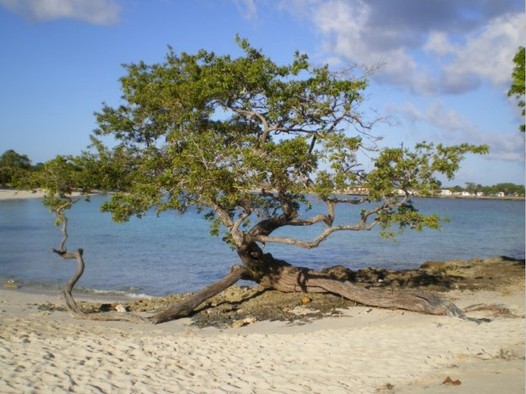 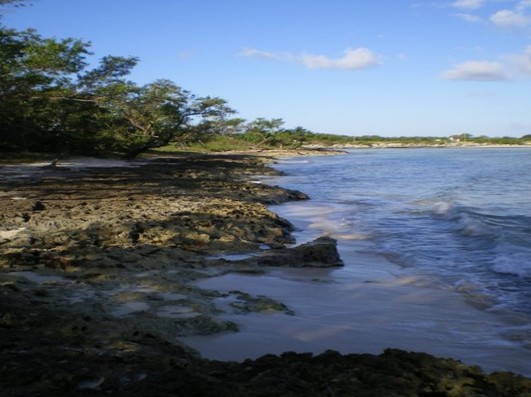 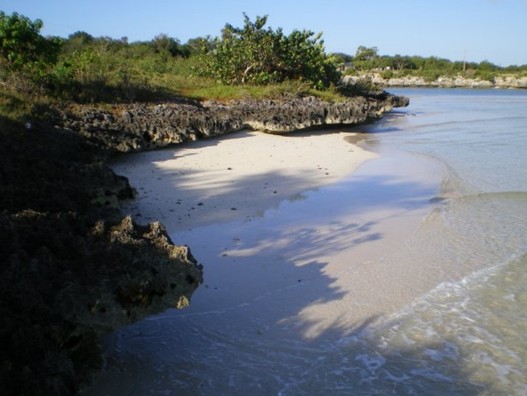 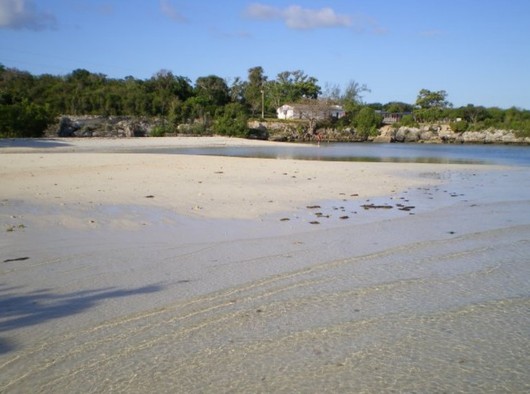 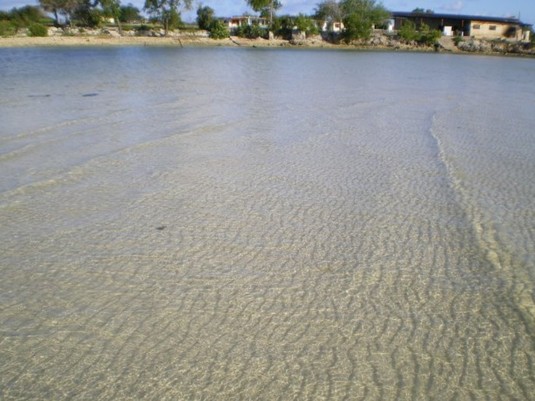 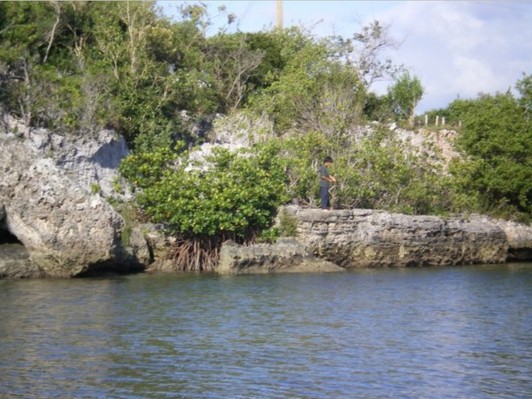 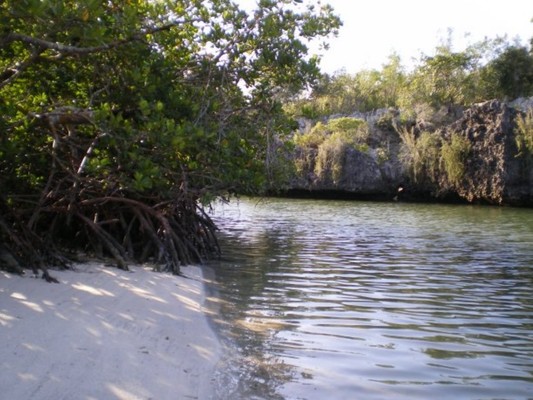 Playa Costa Verde - The Secret Lagoon: On the first days of my travel, I decided to take my backpack and start walking to the North shores and to see what it was there. I reached the end of my beach, I crossed a really short divider with trees between the next beach, I kept on going and I reached a black shore. The rocks that made the shore were sharp and black. Looking them more carefully I discovered that it was a very ancient black coral reef!!! In fact, looking it carefully, you could see ancient corals and shells as part of the black rocks. Just a bit more far, I reached a wonderful place. There was a really beautiful beach of white sand. There weren't tourists and it felt so peaceful (that was surprising that people spent weeks into their resorts even without leaving the same beach for a walk). The white sand was mixed of corals and shells. The water was low a warm. Looking to it more carefully I discovered that it was a kind of lagoon. In fact, the beach was a divider from the open sea and a lagoon. The same beach disappeared when the tides came up and water flew into the lagoon. On the other side, there were Cuban housings and I wished to go and see it, but first I had to come back to my resort. In the afternoon I'd be back there and continued my journey. 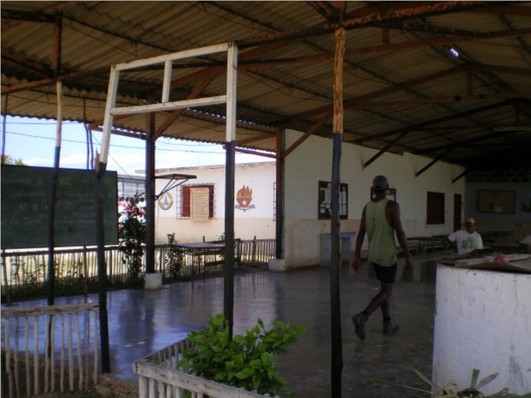 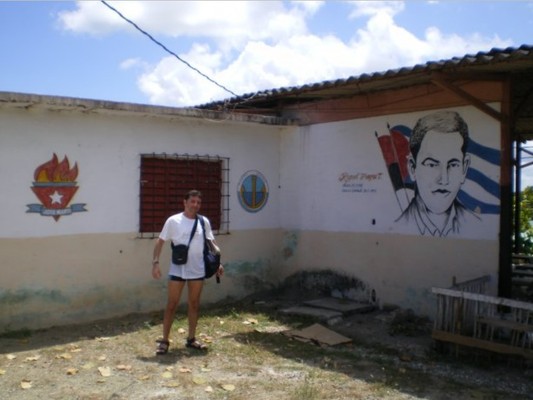 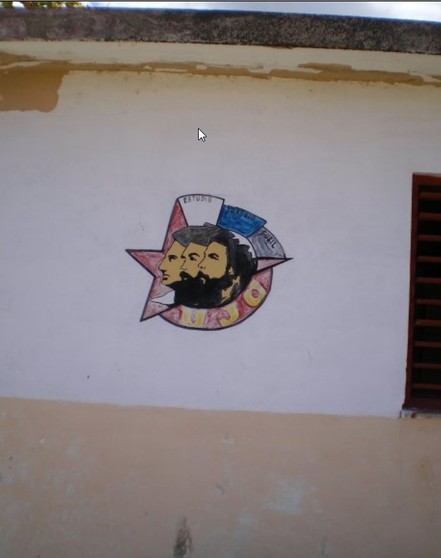 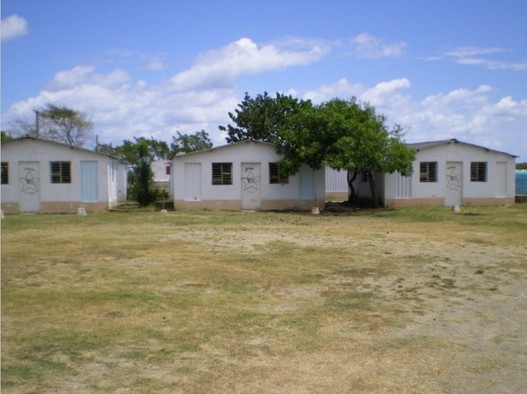 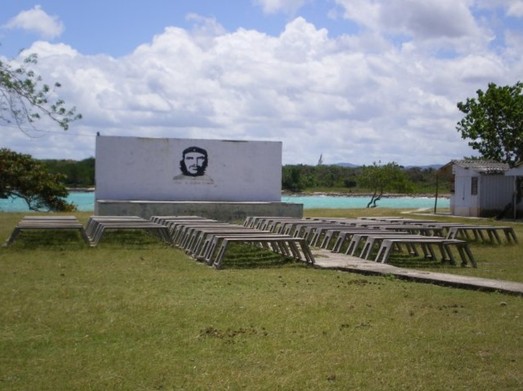 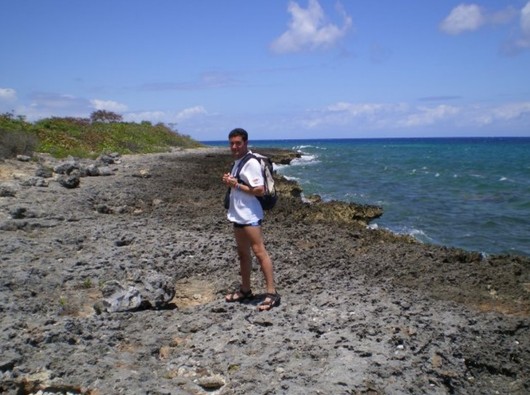 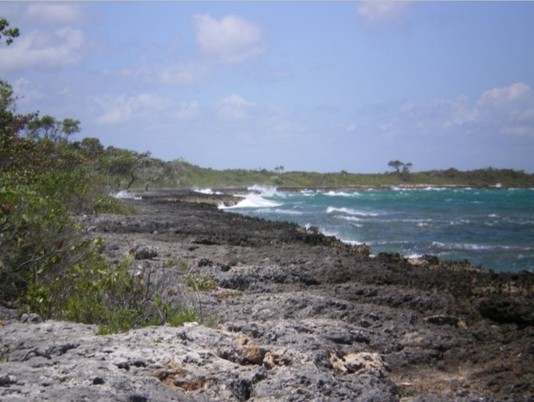 The other side of the lagoon - The Cuban summer champ: In the afternoon I told to my friends about my discovery (I felt like when in Petra I drove my friends to the "Tomb of the Lions" outside the normal tourist circuit). They asked me why I went there and I told them that I wanted to go and see the lighthouse, but the laguna stopped me. In the next days I'd try to go again there in early morning just to avoid the rising tides. They asked me if I could show to them the place. So, I took again my backpack and I drove them to the lagoon. As soon as they reached it, they were amazed by the place (the rising tide had already covered some nice spots). Some of my friends greeted with me for showing them that heavenly place, but a guy looked like he wished to be the one that discovered it. So, he kept on asking to cross the lagoon. I told him that he'd need shoes because when I came in the morning I seen that on the other side there were sharp black rocks and he was barefoot. He didn't care, so we moved. I held my backpack on my head and with water to my chest we crossed the bay and reached the other side. Here we found out that the place that looked like a Cuban village, was a Cuban Summer Champ. Here are sent Cuban boys and girls to have holidays. In the first picture of this group you can see the school of the place. All the walls of this place were painted with propaganda about the Cuban Revolution and you could see that the same organization of the young Cubans sent into this place was made in grades. Each grade had the same structure decided around the year 1950 by Fidel Castro and Che Guevara (you can see the propaganda and symbols of the grades in the second and third picture of this group). Walking freely around, with the permission of the Cubans working here, we discovered that here the young Cubans are also taught to build shelters in the forest and to light fires. It looks like there's still something from the Cuban Revolution. In more, in the main square, you could see a big wall with the face of Che Guevara painted over, with the sentence "Hasta La Victoria Siempre" where the young Cubans probably have lectures about the Revolution. After visiting this place, we kept on walking forward heading to the shores and to the lighthouse. The tides were rising and the sea looked much more rageous than before. The shores were even more sharp than how were before the lagoon and the guy that asked me to bring them there decided to stop because he hadn't shoes. Seeing how it was going on, we decided to head back, but I decided to come back there someday. There was too much to explore left. While coming back, the water in the lagoon was even higher than before, and also the wind rose. Many people with small boats were having problems. While coming back we even met two Italian girls that were dragging their rented boat on the sandy beach because they couldn't come back in sea. That day was really interesting and we had the good chance to have a first meeting with the real Cuba.

Cuba, pleased to meet you.

Next Letter
Powered by