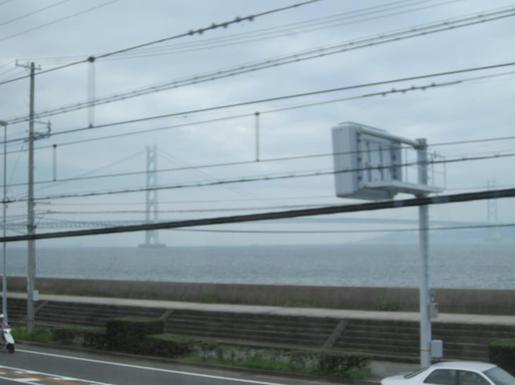 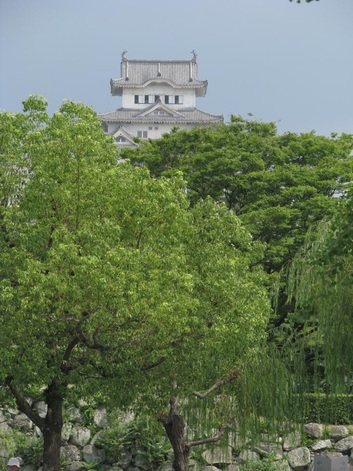 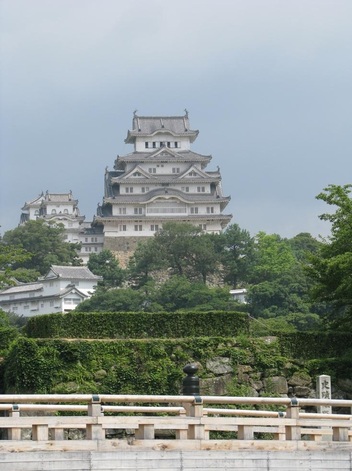 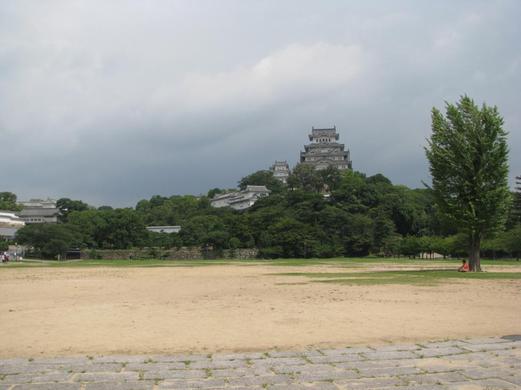 Our alarm clock woke us up that was early morning. The sun was rising and starting his journey across a clear blue sky. Today was the day of our trip to Himeji, a coastal town, and I didn’t need to be a magician to predict a scorching sunny day. Finally some sun, we were missing it.
We had our “Continental breakfast” in the hotel, then we packed our small backpacks and we went to the station. Here we took a bullet train to Osaka and then we changed it for a smaller one that was running along the coast. We passed by Kobe with her beautiful bridge and tall buildings, and after a nearly endless slow journey, we reached Himeji.
The town of Himeji rises on the coast and it’s a touristic spot. If I write the words “Coast” and “Touristic” and even also “Spot” in the same sentence, it might sound like one of those beach-towns. Those with hotels, perhaps a sandy beach, many bars and stalls selling junk food by the beach and even water-activities by the same beach. But this is Japan and as far as I knew, Honshu Island isn’t much famous for beaches. So, the “touristic town” of Himeji hasn’t quite a good sea. Actually, here I spotted a single small beach and the rest of the coast looked like taken from a port and shipyards. The main attraction of this town is on the opposite direction of the sea, it’s uphill. In fact, Himeji is famous for its Castle. The Himeji Castle is one of the few ancient Japanese castles still standing and one of the more beautiful. In Japan there are many other castles, but most of them were rebuilt many times in their history, but the Himeji Castle is the one that lasted longer and better without being rebuilt.
The old Japanese architecture wanted that buildings should be built in wood and this involved that castles should be wooden too. Just like any castle in any fable, as for me the definition of castle is “A sturdy building with towers, from the fables, that is usually placed on top of the hills and where live Kings, Princesses in distress, dragons chained in the dungeons wearing leather straps and knights more interested in roasted boar and beer than in girls…”, Japanese Castles were built on top of the hills too. Being made out of wood turned them to be prone to fires and catching lightning during storms due to their position. Perhaps, it wasn’t even the best solution to endure typhoons and hurricanes neither. I’m not an architect and I don’t know how could be their resilience against quakes, but maybe they were made in wood to dig more quickly into the debris after the quakes… Unbelievably many of the Castles survived until the WWII and seeing that from the sky they had a peculiar shape with their structures usually surrounded by what looks like a labyrinth of walls and squares, they were the perfect landmarks for US Bombers to spot targets. The “collateral” problem was that bombs aren’t smart and those who deliver them are even less smart. So, in the hell of the bombings, most of them turned from the class of “landmarks” to the class of “collateral damages” or “causalities” and were definitely destroyed. By good luck, the Himeji castle survived the WWII bombings with just some light damage and in the years following the end of the WWII it was repaired. In our days it’s perfectly recovered and as beautiful as it has always been.
In the recent years the Castle has been used also as the shooting location for famous movies, among them, two very famous are “007 – You only live twice” and “The Last Samurai”. Soon the castle gained new fame, and it took many more tourists in the area. By this way the city discovered a new touristic vocation.
The castle tops the city from a hill and from far with its white colour and the pagoda-bent-roofs looks like a flock of cranes taking off from the city. For the same reason, I mean that the many roofs resemble the wings of many birds, the Castle is also known as Hakuro-Jo (that means “White Egret Castle” of Shirasagi-Jo (That means “White Heron Castle”).
From the station it takes a very short walk to reach the boundaries of the temple. On our guide books was written that it's possible to hire a bicycle to reach for the temple, but it's so close that I'd say that unless you're a bicycle lover, it's unnecessary to use one to reach the castle. As I said, unless you love bicycle, in that case, hire one. 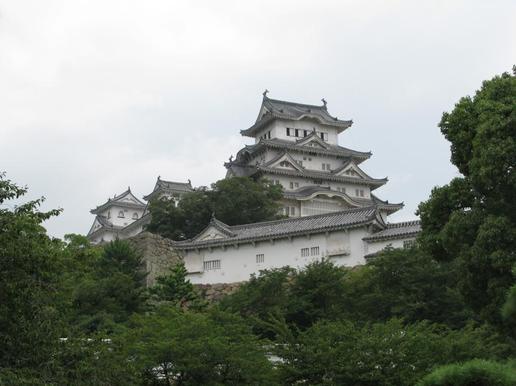 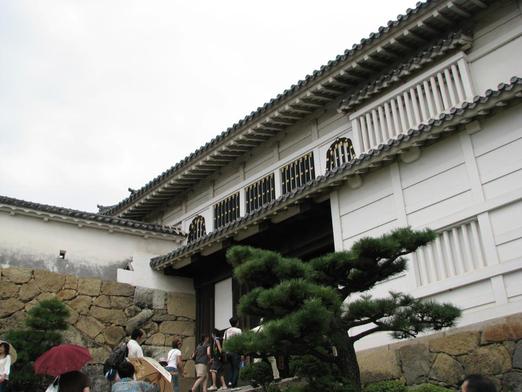 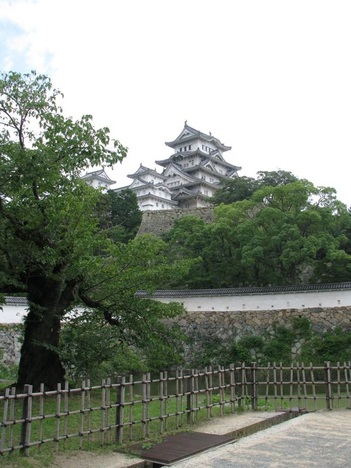 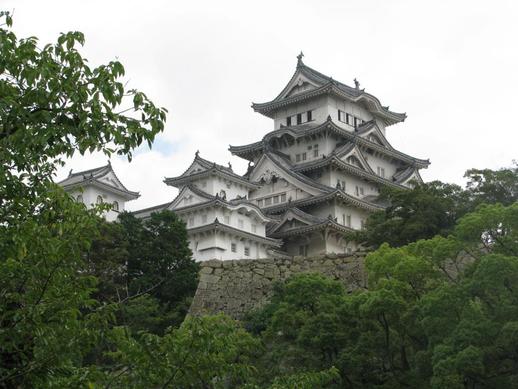 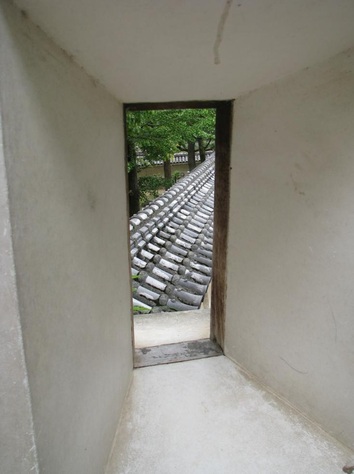 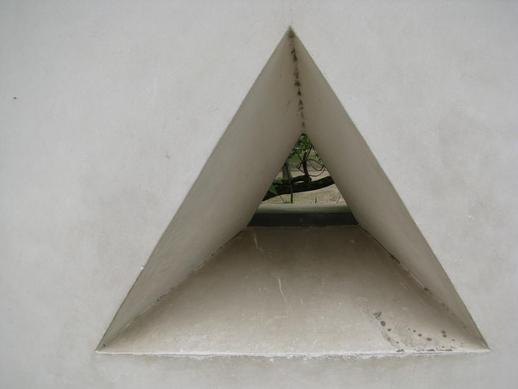 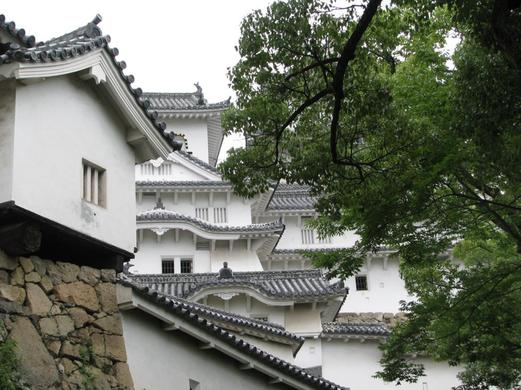 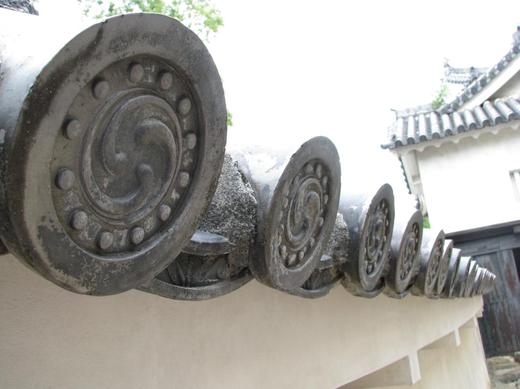 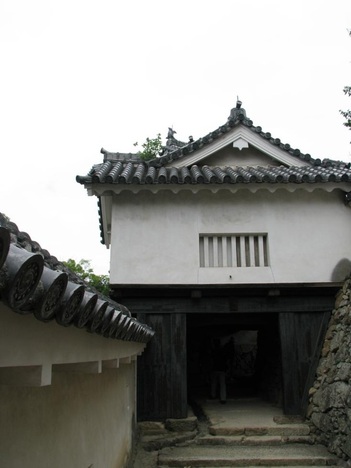 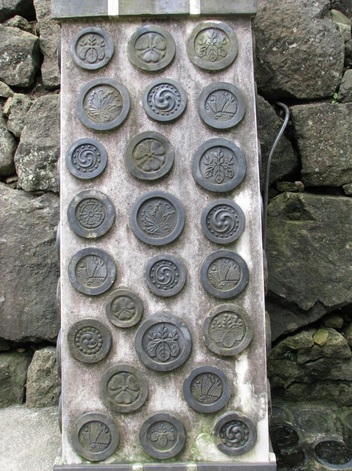 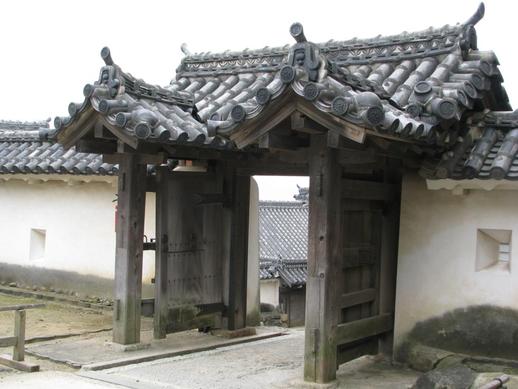 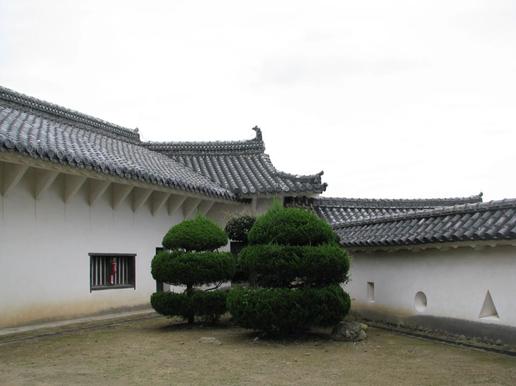 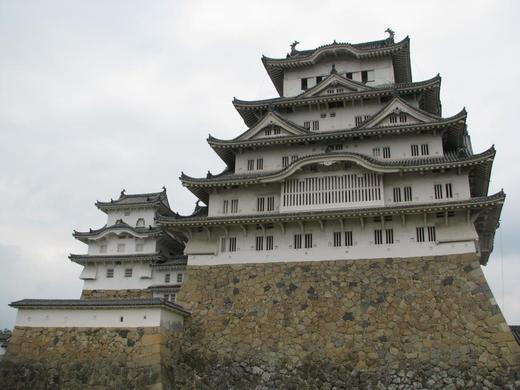 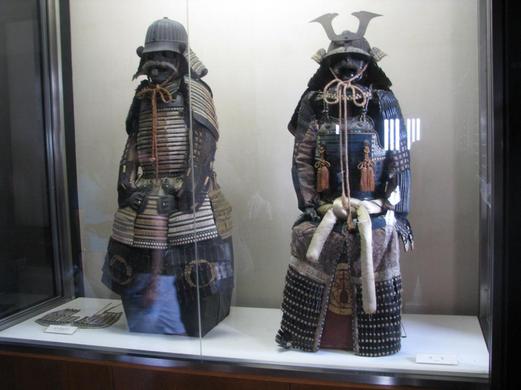 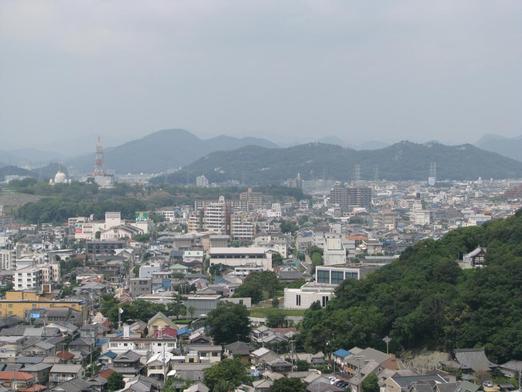 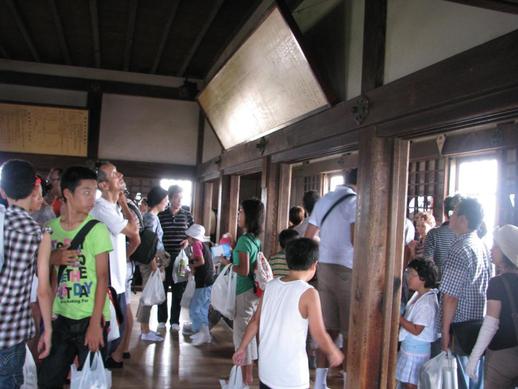 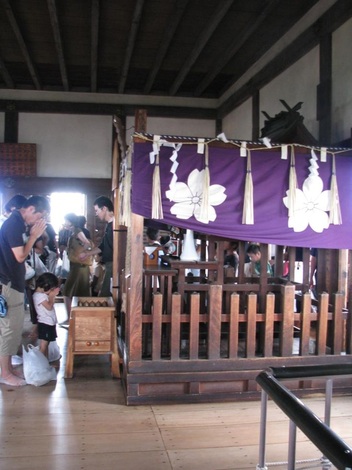 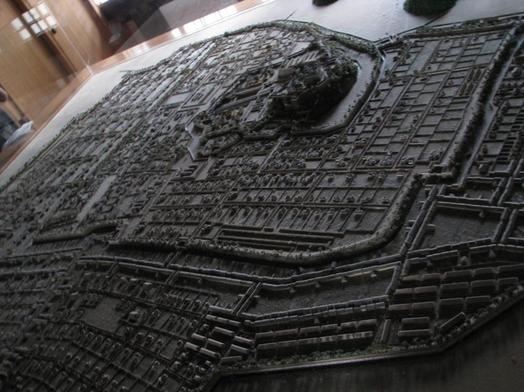 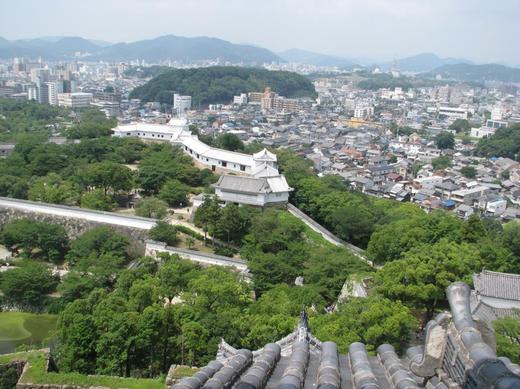 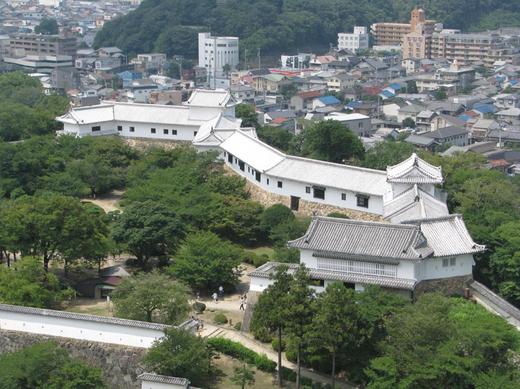 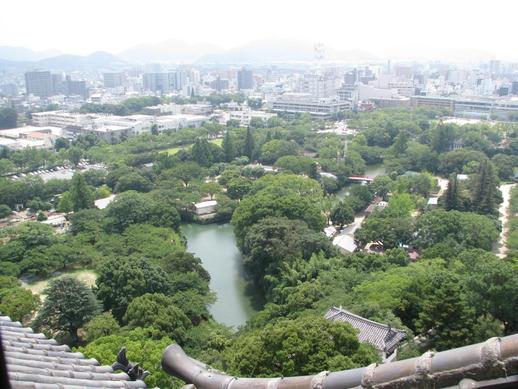 Once we arrived at the base of the Castle, we found that it was majestic, elegant, so close and still out of reach. Between us, a labyrinth of walls, gardens and passageways. Once upon a time, this kind of walls were thought to keep the enemies at bay, far from the delicate Castle, while the armies were facing each other and the domestic soldiers had lots of chances to ambush and stop the enemies. In our days, it’s a good way to make last longer the crave of meeting the castle. Along the way there are numbers of amazing and interesting spots. Here we took so many pictures, and in the end, we felt like we still missed something.
The best part, for us, was the main building. Precisely, the topmost part of the Castle where you can find a “Samurai Museum” with many armors and swords in display. In the higher part, there is a gorgeous sight over the city. We sat by a window and spent some time relaxing and enjoying the shadow while looking at the city. I wondered what a great sight would have been in the glorious days of this Castle.

In the late afternoon we came back downhill and we passed by some legendary spots of the castle, like a coursed well and a mysterious wall with embedded a grinding stone. Like every real Castle the legend was part of it as well it’s part of legend too.
We reached the centre of the city where we had some window-shopping. It looked like most of the shops were aimed to a touristic target
We took again our Shinkansen to Osaka and then the one bound to Kyoto. We arrived that the sun was already set.
That evening we got dressed nicely and we went out for dinner. This time we picked a local cozy restaurant and we dined with Noodles, Sushi and a nice bottle of chilled Sake. After dinner we had a stroll in the desert centre of Kyoto, and slowly we came back to our hotel. Kyoto with her starry night and warm breeze was wishing us a Good Night.