Ciao!!!
How are you? I hope very well!!! Today I'm writing to you about some places near to the place where I was in Cuba. The first is a beautiful beach and the next is a village where Cuban workers live. I really hope that you'll like this part of my diary of the travel!!! 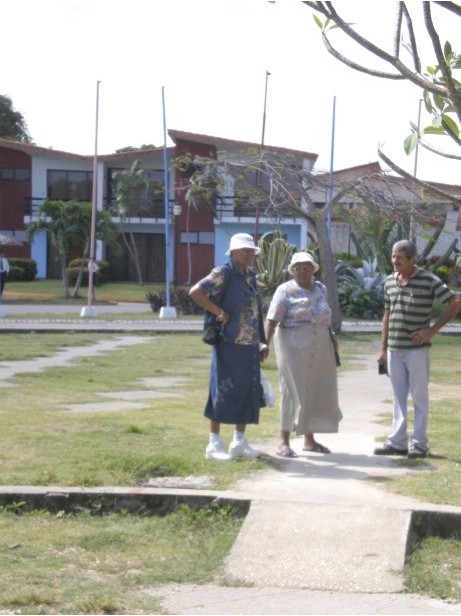 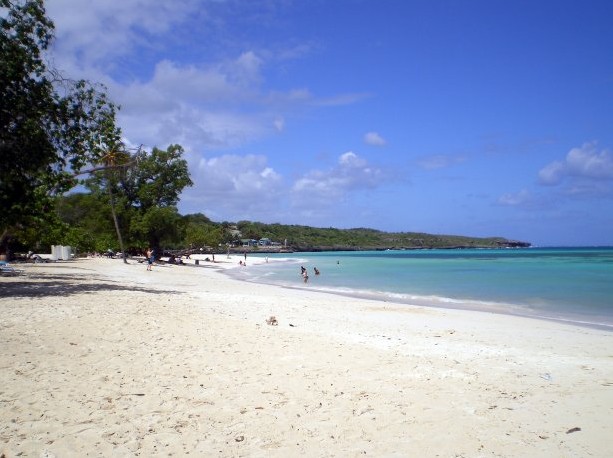 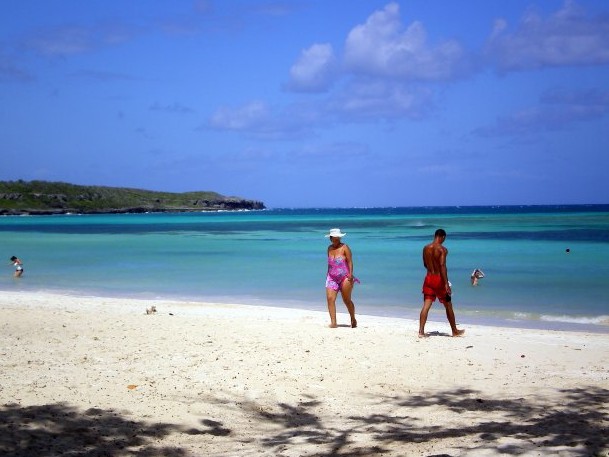 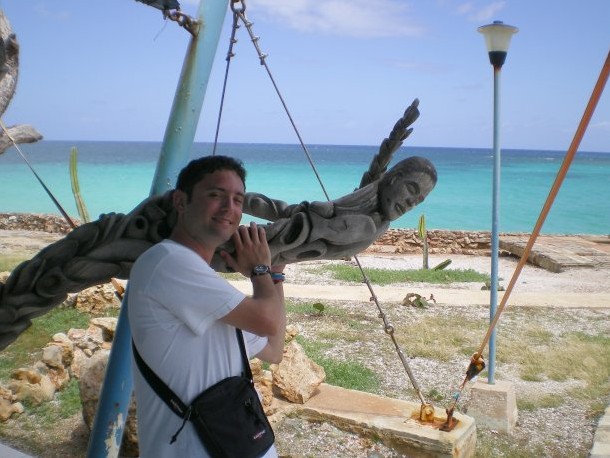 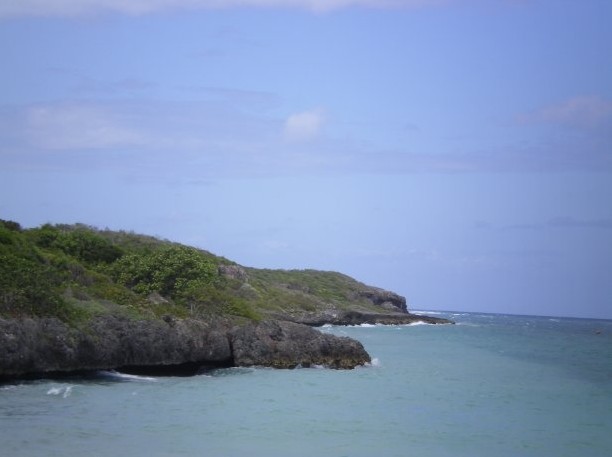 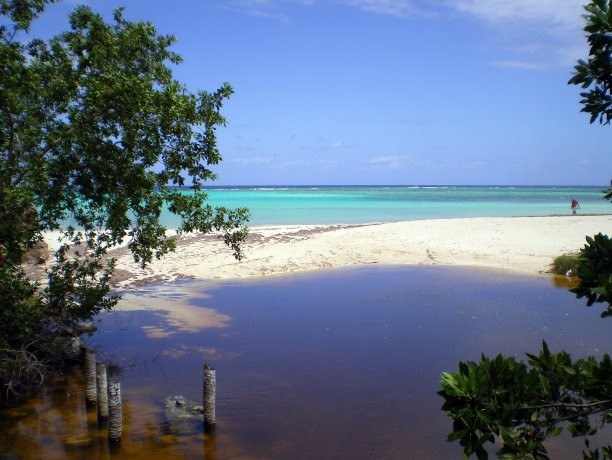 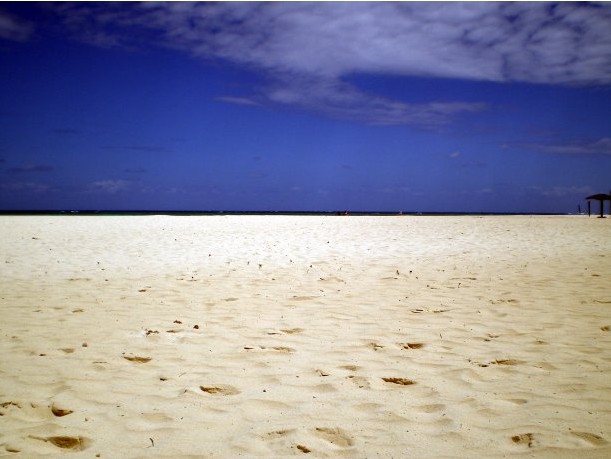 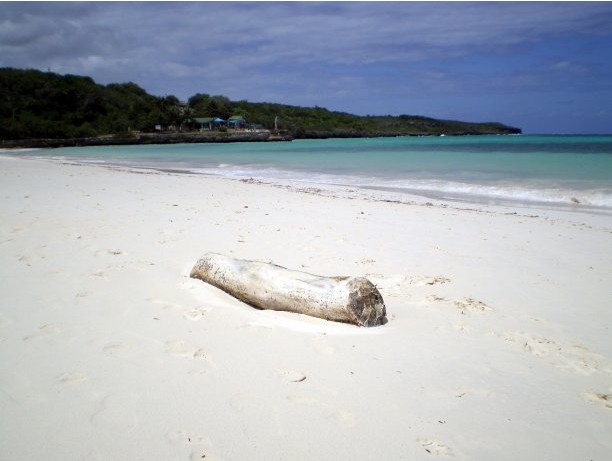 When I was in Playa Costa Verde, a day that I was talking to a touristic guide of the resort, I was told that we weren't far from the famous touristic place called Guardalavaca. Actually I knew that we weren't very far from Guardalavaca, but I thought that it wasn't so easy getting there. So, I asked around and I was told that there were few minivans that were linking the resorts to Guardalavaca. In more, a friend of mine, was told about even the timetable of the connections to Guardalavaca. So, we planned to have a trip the next day. The following day, we took a minivan only for us and we went there. Actually, the city of Guardalavaca isn't a real city. I think that in this place only few buildings are real housings, while the bigger part are hotels and resorts. Every morning, in the main square of Guardalavaca you can see a small market where are sold handcrafted things. It can be interesting to take a look to the shops, but soon later you feel that you need to go and see the real thing that brought you there. Just behind the square, there's a small way that brings you to the beach. As soon as you step a foot on the white sandy beach, you find yourself with few restaurants on your sides that play Carribean music and you feel amazed by the blue sea before you, with its waves that gently caress the soft white sand of the beach. The beach is long a few kilometers and you can see that, along it, there are many trees. If you wish, you can lay your towel under one of them, and you can stay there. Here we took a nice bath and later we took sunshine for a short while. In fact, soon later, my friend Giovanni (he is the guy on the right hand side in the ninth picture of this group, while the one on the left is Davide) and some others asked me to join them and to go and see the beach a bit more far. So, I took again my stuff and followed them. In the farthest side of the beach, you can see that there aren't trees anymore. It's only sand and sea. It's very nice to see it, but it feel like being into the desert, and I was missing the shadow of that tree of before. My friend Giovanni started to be hungry, and we climbed a short wall to reach a luxurious restaurant on the rocky shores. It was very nice to watch to it, but it was far too much expensive. So, we made our way back, this time through a small wooden bridge over the lagoon, and we reached again our friends. Here we packed our backpacks and went to one of those small restaurants with music that we seen before. It was like hearing a far call from Cuba herself that invited us to come and eat with her at one of those typical restaurants. And that call was too much tempting, and we followed it with pleasure. We sat to a table, and in that place we felt the real Caribe. The joyful music was played all around, we relaxed in the shadow of a tree and we ordered some food. We decided to order a roasted chicken, and later we seen how it was cooked. They made a big fire, then they nailed some chickens on a pole and cooked right there. When we were served it, we found that it was absolutely delicious (thinking to those rusty nails that were used to fix the chicken to the pole, I believe that I enjoyed that food more, knowing that I just done recently good vaccinations). While we were eating came some singers and played for us some music, that was very funny!!! When we came back to our resort, we decided to spend the afternoon at the beach, and that evening we had a big party, that was so funny!!! Especially because Davide, that is very crazy, got absolutely drunk and we barely understood him talking while laughing!!! 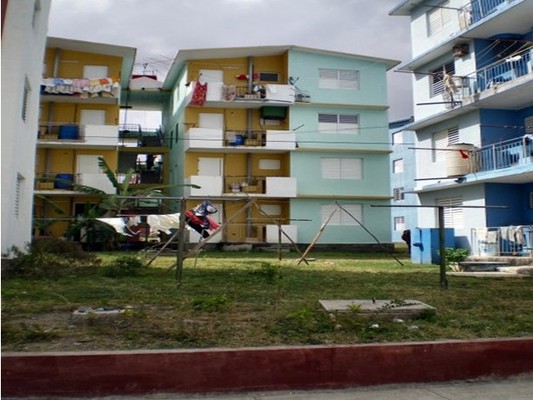 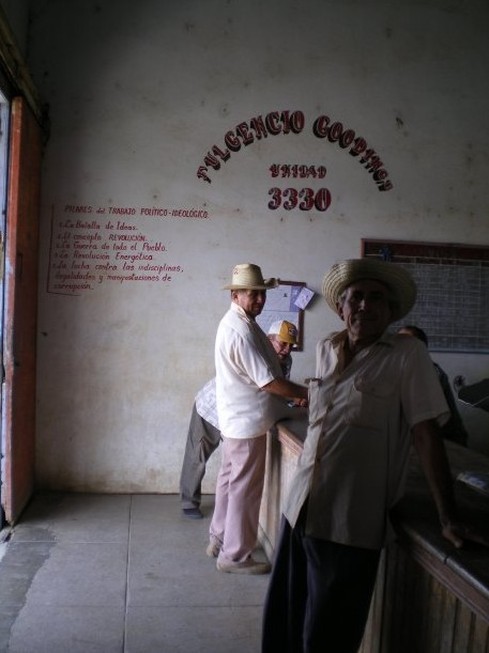 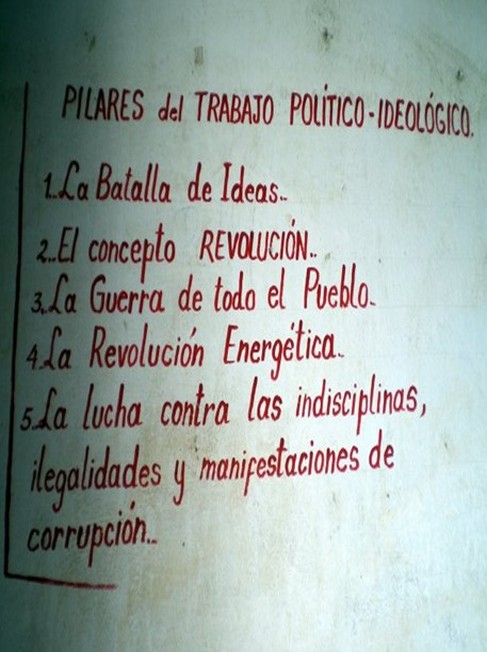 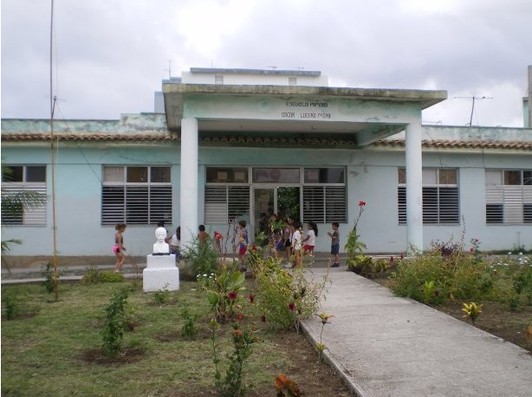 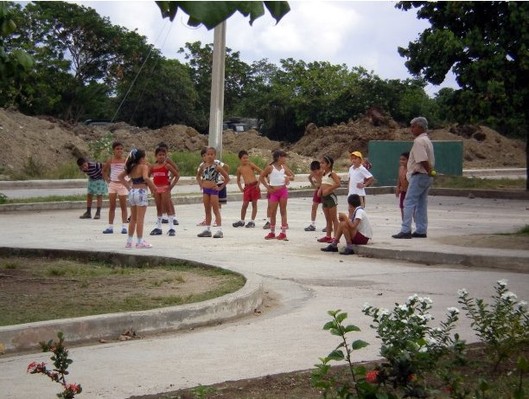 On the last full day of my staying in Cuba we rented some bicycles and with a guide we went to see a village where live the workers of the resorts. When I was there I thought that, more than a village, it looked like a neighborhood. It was made of tall concrete buildings and didn't match much on what people thinks about Cuba. The neighborhood looked empty, maybe because it was late morning and people were at work into the near resorts. Here a guy that came with us shown us the difference between two kinds of shops. In fact, in Cuba there are two kinds of money. The first is the Cuban Peso that has value next to nothing. This money is belonged only to Cubans that can only use it to buy vegetables or meat in the markets, because it can't be used to buy anything else. The next money is the Peso Convertible that is the money used by the tourists and by Cubans too. The Peso Convertible is quite valuable and a Peso Convertible is 20 Cuban Peso worth. So, while we were into this trip, we were brought to see first a shop where you can only buy with Cuban Peso. It looked very old and it was almost all empty. Only few things were placed on empty shelves. You can see the shop in the second and third picture of this group. Later we were brought into a shop where you can only buy with Peso Convertible. It was filled with stuff, but the prices were very high. It was impressive to see those prices. The thing that shocked me was when a lady said that things weren't expensive, because they had the same price than in Italy... But she forgot that in Cuba people gain about 20 Euro per month!!! This shows that many times people travel without knowing where they are going, and this makes me sad. I believe that it's not worth to go to a country if you know nothing about it, and not even try learning a thing from it. Maybe I'm too much rough, but it's the way I think. I just want to pay deep respect to the people of the country I visit, and going there knowing nothing about them, is like refusing their culture and lifestyle. Anyway, later we were brought to see a school from outside. In Cuba the school system is absolutely the best thing of all. Maybe it comes from one of the principles of the "Revolution" that were "Estudio" (Education), "Trabajo" (Work) and "Fusil" (Rifle)... It looks like Fidel Castro cares so much about the education of the Cubans, and this is very good of him. When we were there we seen that it was going on a gym class, and in spite there was a teacher, the babies had to follow what their "Class Boss" was ordering to them. That was so funny!!! The girl was pretty nasty with them, and I believe that in future, she'll be a good new "Fidel Castro"!!! I believe that it was worth going and see that village. In fact, we had the chance to see how is the real life of the Cubans, not only how we see them in the resorts. 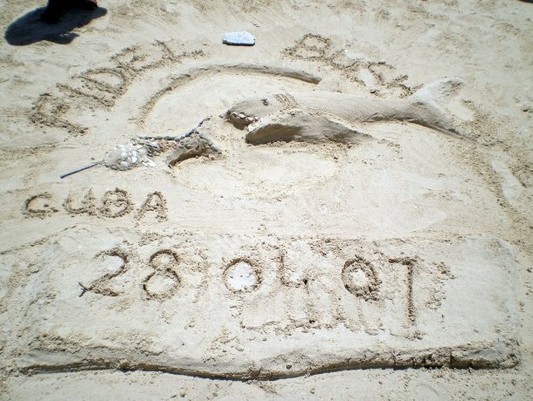 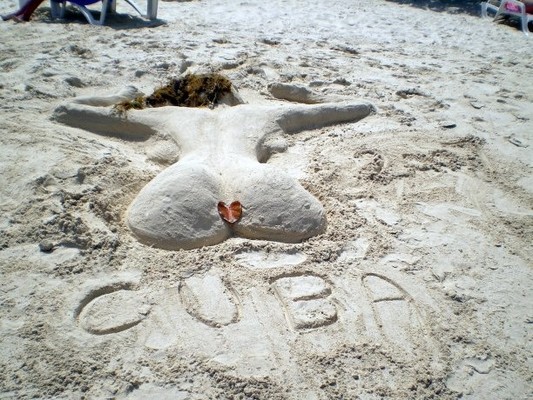 During the holiday in Playa Costa Verde my group of Italian friends became quite famous among the people of the beach. In fact, every day, my friends Giovanni and Davide were used to make sand statues, and soon my group became famous as we were all artists. I only helped them two to do some small things, just like also Alessia did. So, on the end, we could say that the "Master Artist" was Giovanni, and we were all his helpers. The statue that made us famous on the beach, was the first. It all happened as a joke, because Giovanni and Davide were making a statue of a naked woman taking sun. While coming back from the sea, I told to Davide to enhance some "parts" because she looked like a man... So, he decided to make something quite weird and he added "something" manly to her... So, you can imagine the faces of the people walking by... I was quite ashamed of it, but in short it became a masterpiece!!! People came to picture it!!! The best was the first one, a Canadian guy that had a big laugh of it, and later came with his camera to picture it. Every day he came back to picture our works!!! On this group, I'm showing our best ones. The fist is a bit of a "politic" one with the "Fidel Fish" (the one with the cigar) about to being eaten by the "Bush Shark". The second is just another lady taking sunshine. Ok, maybe they will not be on every art book, but at least we had big fun making them up!!!

Playa Costa Verde - The Coming Back 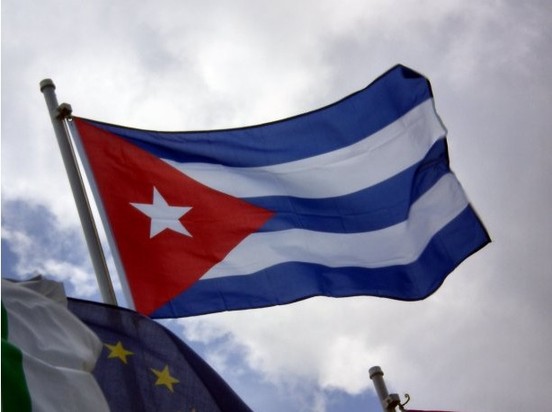 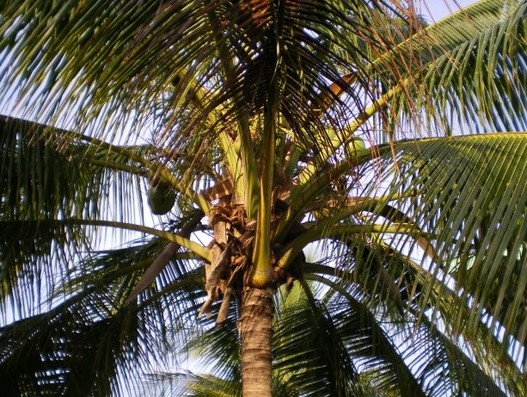 Just after a week from my coming to Cuba, it came the time to pack again my bags up, and to come back. This time, the travel was quite different from the others. In fact, for the first time, I went to see a place that I heard so many times to talk about, that I even studied so much. Many people spoke of Cuba always on the same way, picturing it on a certain way, but while I was there, I found out that it was much different than what people said. I can't say if it was better or worse, but just different. I liked this place so much, and I'm grateful to this travel to having me let to meet some pieces of the real Cuba. Now I've a different story to tell than the one of many people that were just into the resorts. I hope that you liked my Diary of this travel and the things that I wrote about. The main thing that I hope that I shown with this Diary, is that I liked this country so much and I tried to make mine any single piece of it, and to turn it into a feeling to be never forgotten. I loved this travel, and now I can't wait to have my next one.
Previous Letter
Powered by