Ciao!!!
Today with my travel diary I'm going to show you a wild part of Cuba. In fact, I'm about to tell you about a day that I decided to go and explore the surroundings of my resort. Before going to have this trip I had to wait a few days, in order to study the tides and to get the right time with them, and on the end I took the right moment and I seen a part of Cuba that are out of the normal tourist tracks. I hope that you'll like to come with me and to see this part of the real Cuba!!!

Playa Costa Verde - The sunrise on the Eastern Coast 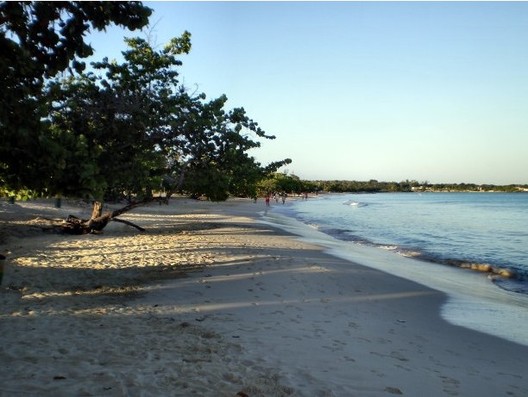 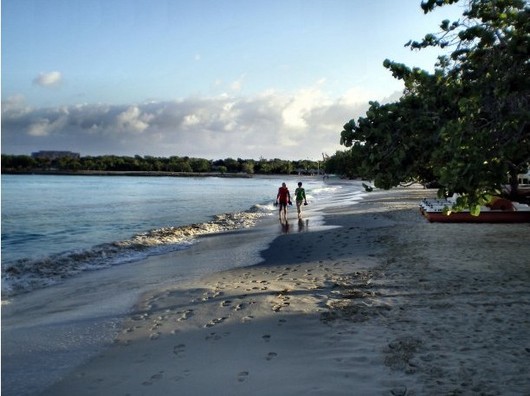 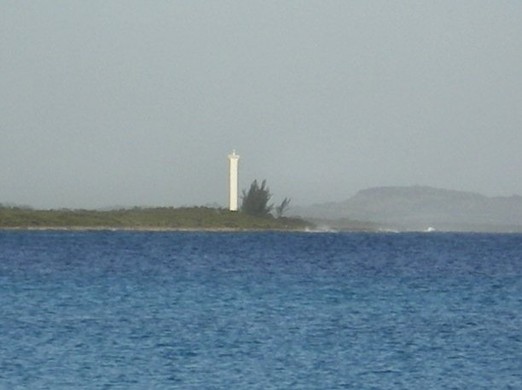 When I was in Cuba I was used to get up very early from my bed. Probably it was for the difference of hours from Italy that made me feel less sleepy. This was a good thing, because on this way, every morning I went to feel the morning sun on the beach, when the sun is just low on the hills and the beach is tanned of golden rays that melt into the indigo sea. The peace surrounds you and you just feel the sound of the waves near to you. On this morning I checked how were the tides. In fact, it looked that the tide was very high and this meant that it was about to lower. On the other side of the bay I could clearly see the lighthouse, standing proudly on the shores. It was so clear that looked like the weather should keep very good for all the day. That it was the time to get ready. I was waiting for days to go and to meet that lighthouse. The first time the tides and the bad weather didn't let me go, but now it was the time. On the first two pictures of this group you can see how looks the beach of Playa Costa Verde on the sunrise, and on the second you can see the lighthouse taken from the other side of the bay (this is a picture taken with the zoom of my camera, because otherwise you can't see it on a normal picture).

Playa Costa Verde - The other side of the bay 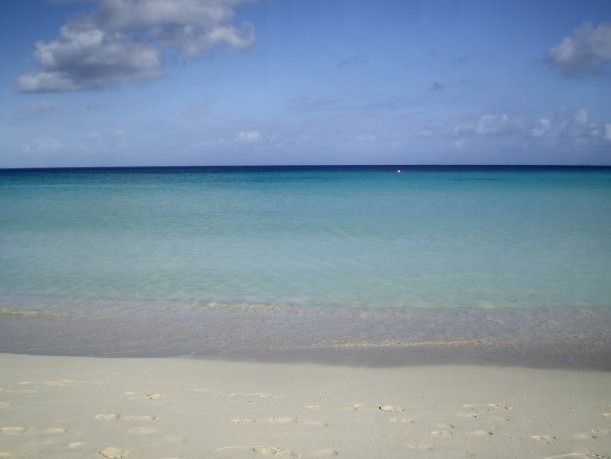 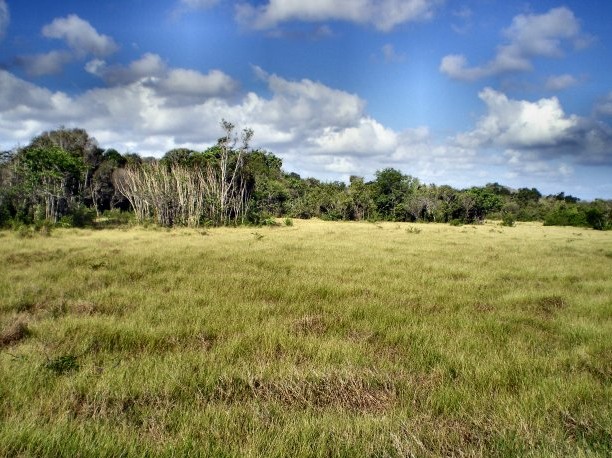 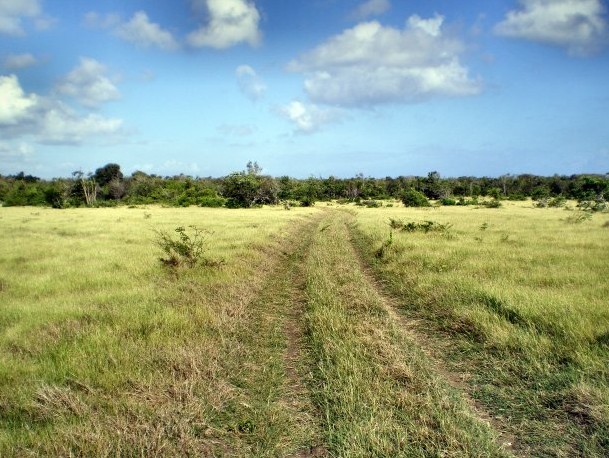 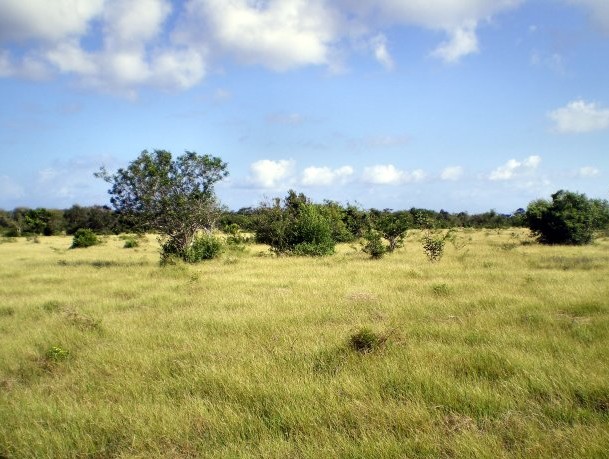 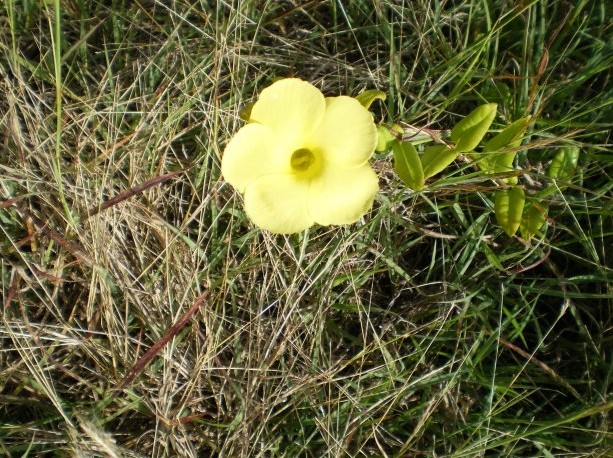 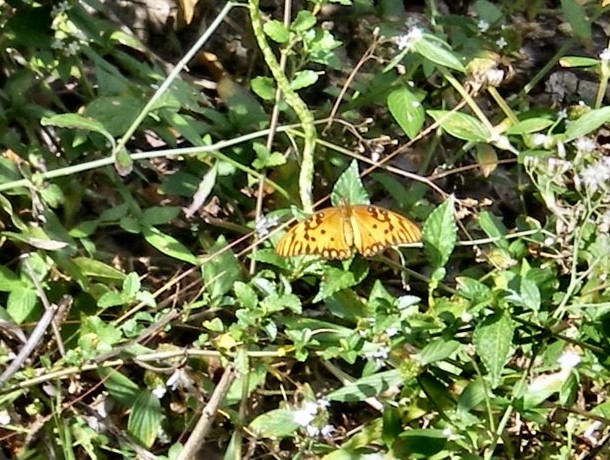 On the early morning, when I seen that the tides were going down, I got on moving. I started to follow the coastline until I reached the beach that I "discovered" few days before. Here it looked like a small bay and I decided to take my backpack on my head and to cross the bay with the water up to my chest, otherwise I couldn't reach the other side. Here I met a Cuban fisherman called Juan. He was a quite funny guy that asked me to spend dome time to chat with him. It was good to talk to him a bit while getting ready to continue my journey. Just before going I asked him which was the best way to reach the lighthouse. He told me that the shore way wasn't good, it was too much dangerous, it was better to walk through the woods. So, he shown me the way. He also told me that "El Faro" was an old lighthouse, he said that it was beautiful, but very old. So, it turned to be even more interesting to go and see it. The way that was shown by Juan was through fields of grass that waved at the gentle breeze, and then started the real woods. I felt voices quite far through the trees, and this made me feel a bit uncomfortable. So, for the first time since long, I decided to keep my knife ready to be taken out if danger came. It was very good that I was mistaken and I didn't need it. In fact, the voices were from a group of young guys that were having a party in a Cuban Summer Camp not far from there. 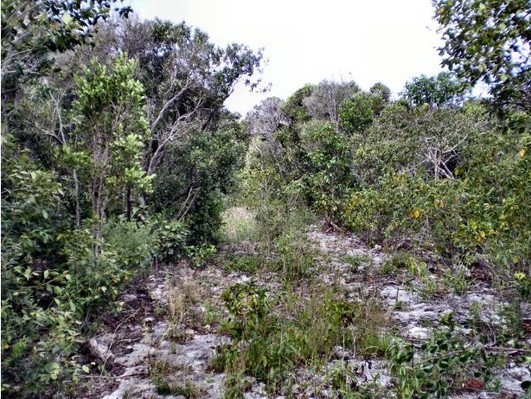 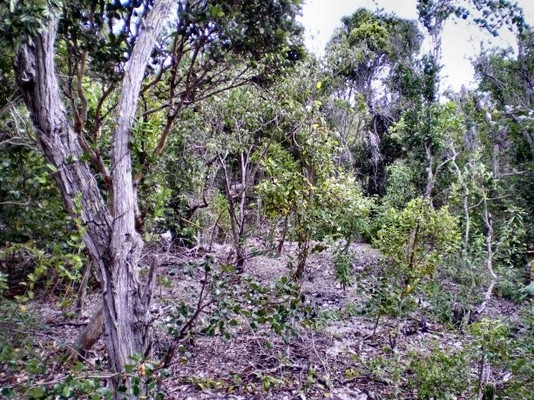 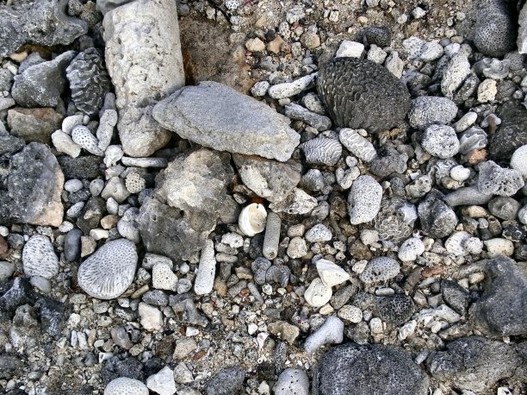 Just after the fields of short grass, I reached the beginning of the forest. The fisherman Juan told me to keep on the main way, so I did as he said. As soon as I walked farther more the woods turned into a forest. The trees were always more and the grass was giving me problems on going more far. For a short while I made my way using a wood stick to move the branches and the bushes. Then I decided that it wasn't good keeping on going on that way. I needed to find another way. Here I noticed a thing. These woods were growing on some rocks, and if you looked at them more closely, you could have a surprise. In fact, those weren't rocks, but what remained from an ancient coral reef!!! In the first picture of this group you can see the rocks on the ground, and those are made by a very ancient coral reef!!! On this point, I heard that from my right side came the sound of the sea. So, using my wood stick I make my way on that side. It took to me again a long while to make my way to the shores, but then, getting through some coastal bushes I found myself again on the shores. I turned myself on the left and I seen that the lighthouse was very close. I was almost on the place that I wanted to reach. On the third picture you can see some of the coral reef of the shores. As you can see it was all made of real coral!!! It was amazing to be there.

Playa Costa Verde - Beyond the cape 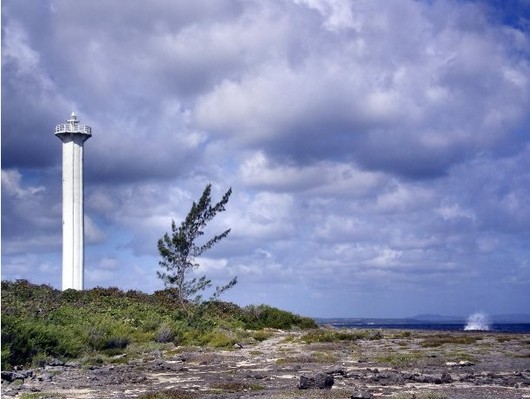 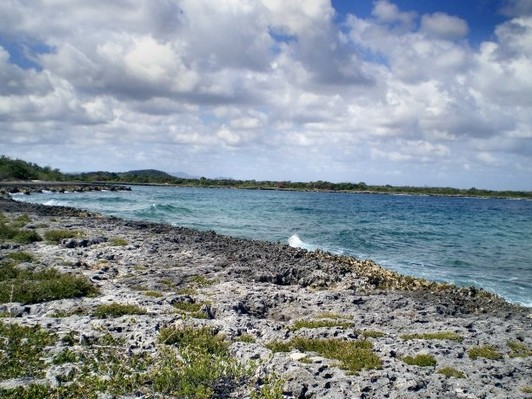 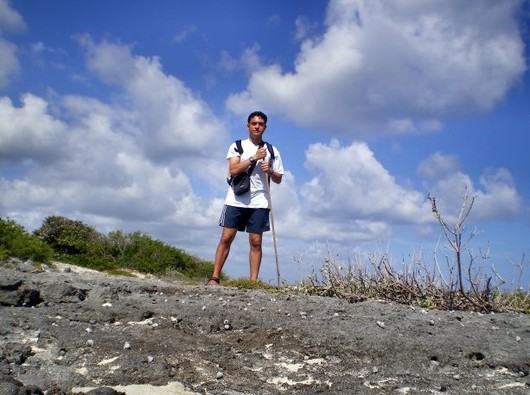 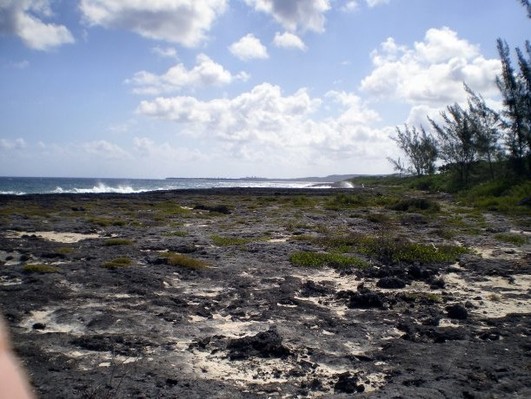 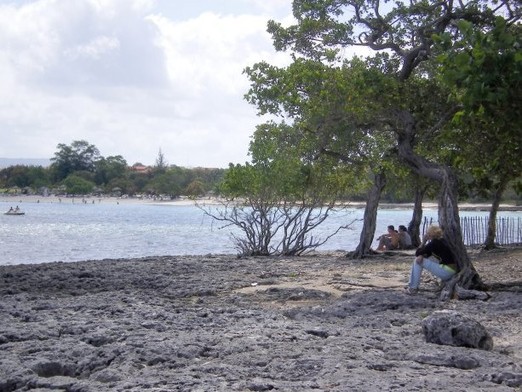 In the previous days and also in the journey through the forest I've seen that all the both sides and also a part of the inland were made of an ancient coral reef, but I thought that it was only some pieces around the beaches. When I reached the shores near to the lighthouse I found out that the coral reef was long for kilometers. On this point I hadn't another way than to walk on the reef itself. Somehow it was even more difficult than to be in the forest. In fact, the rocks were as sharp as blades, and I had to take care where I was walking. In a few minutes I reached the lighthouse. It was very tall and, as Juan said, it looked very old. It was an old automatic lighthouse, standing on the shores of a low cape. Looking to it from more close it didn't look in very good conditions, and much dirt was around it, like it was long time that nobody got next to it to do some maintenance. All this sight made me feel a deep sense of loneliness. It was like being on a forgotten corner of Cuba, where nobody wants to go. So, I decided to go a bit farther and to see what it was on the other side of the cape. I expected that I could see the white beaches of Playa Guardalavaca, but on my surprise, there was absolutely nothing. The black reef was going farther for kilometers without any trace of anybody. On this point I decided to come back. On the fifth picture of tis group you can see the shores. If you look close to it, you'll see on the other side of the bay two buildings that look like two small towers. These buildings were belonging to a resort next to mine, so you can see how far it was. The picture with me was taken with the automatic picturing of my camera. I made my way on the coral reef. I preferred the sharp stones than being among the dense woods. So, on a bit more than half an hour I reached back the Cuban Summer Camp. It was nice meeting again the Cubans and to be among them. Just after the Summer Camp, I crossed the bay with my back pack on my head and soon later I reached the resort. My friends asked if I really reached the lighthouse, and when I shown the pictures taken to it from close, some said that I'm crazy to do all that way just to see a lighthouse, and the doctor was upset because I didn't bring him with me. This was an exploration that I needed to do, and I wanted to do it by myself. I'm sorry for the doctor, but if he wished he could do it by himself too. Anyway, it was very good to me to see how the nature is outside of the resort. 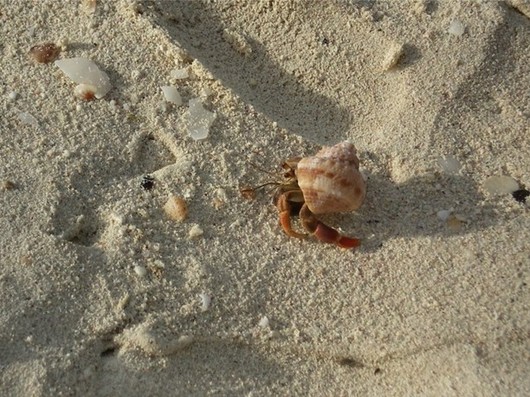 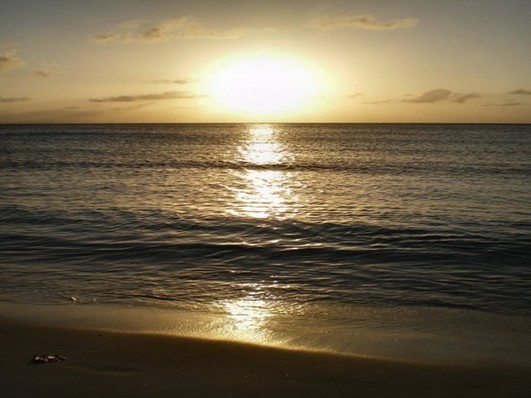 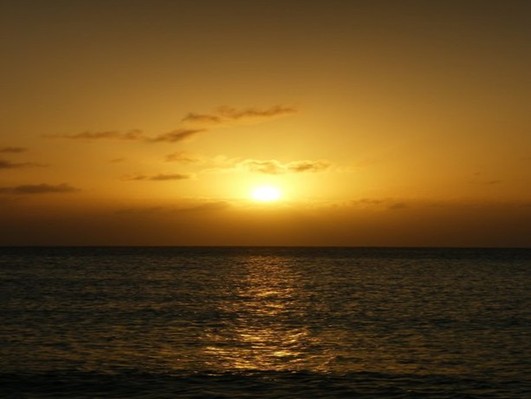 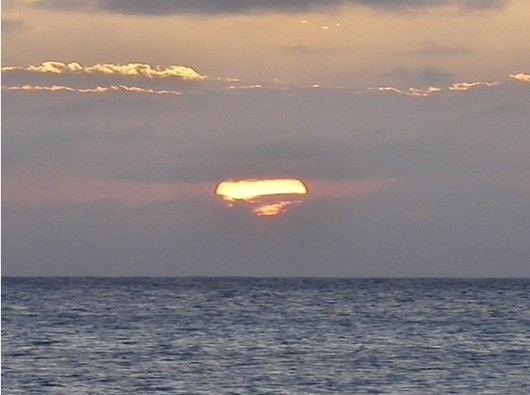 On the late afternoon with my friends decided to spend some more time on the beach, just to see the sunset on the Carribean sea. It was very nice to stay on the beach when it was getting empty and it turned to be again so quiet. The sun went low on the sea, and all around us came out of the sand many hermit crabs. It was nice to see them to walk around us looking for some food. We waited until the sun went down on the horizon, just behind some clouds. It was so nice to be there with my travel friends, and I hope that you'll like the pictures that I took on that moment.